In this work, SiC-Cucermet coatings were deposited on C45 steel substrate by using the plasma spray technique, at varying spaying parameters under atmospheric or Argon gas ambiances. The microstructure of sprayed coatings was exanimated by using scanning electron microscopy (SEM).The coating elemental and compositional analysis was performed by using Energy-dispersive X-ray spectroscopy (EDX) and X-ray diffraction (XRD) techniques. SEM/ EDX/ XDR results indicate that the optimal factors were: (i) 85SiC : 15Cu powder feedstock, (ii) 42 g/min powderfeed rate, (iii) 380 A plasma current, (iv) 50 mm spraying distance, and v) under Argon gas protection. The apparent porosity of sprayed coatings was only in range from 1.38 % to 1.65 %. The average thickness of coatings was in range from 200 µm to 300 µm. By SEM images, many SiC particles are seen in the coating, but their shape become smoother than that in the as-received SiC powder - due to the presence of Cu in their surface as binder. XRD analysis indicated that content of SiC phases is 86 ±3 %.wt; and Cu content is 14 (±3%) wt.%. The application of this plasma spayed SiC-Cu coating is very promising in the severe corrosion environment.

By having excellent thermal, chemical and mechanical properties, SiC has been considered as the most promising ceramic for high performance applications in the aggressive environments.

In the field of coating science, SiC is expected to provide the extremely high anti-corrosion, strong wear resistance, heat and chemical resistant properties for both industrial and space applications (against wear and high temperature oxidation) [1].

In this regard, SiC can be used in various types of coatings, such as organic, metallic and ceramic coatings. In case of organic coatings, SiC particles had been used as filler/reinforcer in various types of organic/polymeric matrices, such as polyfluo wax/polyurethane [2], polyetheretherketone [3, 4], poly(o-toluidine) [5], epoxy [6, 7]. For metallic coatings, SiC particles could be embedded into metallic matrices, such as Cu [8, 9], Al [10, 11], Ni [12-19], Ni-Co [20], Co [21] matrices.

Regarding the thermal sprayed SiC coatings, many efforts had been carried out to fabricate the pure (100%) SiC coating, but still being challenge due to the nature of SiC raw material. Several approaches have been developed, such as i) plasma spraying at high current/power to melt the SiC powder material, ii) conventional plasma spraying for mixture of SiC and other ceramics (with lower melting point for a eutectic phase, and iii) plasma spraying at low current/power to fabricate the SiC/metal cermet coating using metallic phases as binders (bonding agents).

On the first approach, many researchers, including our group, found that SiC was decomposed under plasma spraying process at high current/power. It was reported in literature that pure SiC coating could not be deposited by thermal spray because SiC materials should decompose before melting [25]. That is why we could only observe small amount of SiC phases in XRD pattern, along with its decomposed products.

On the second approach, Tului et al. [25] successfully fabricate the coatings containing up to 66 vol.% of SiC by plasma spray, using a mixture of SiC and ZrB2 as spraying material. As reported, these two compounds formed a eutectic phase, at a temperature lower than that of SiC decomposition.

Regarding the third pathway, incorporation of metallic binders could facilitate the bonding of SiC particles, allowing SiC-based coating to be deposited. Recently, we successfully fabricated the ceramic/metal cermet coatings using plasma spaying (Cr3C2-25NiCr coating) for protection of steel from corrosion-erosion [26]. Thus we focus on the SiC-Cu cermet coating in this work.

The most common method for fabricating of SiC-Cu composite is the powder metallurgy (PM) with sintering or hot-pressing, at the temperature below the melting point of SiC (2830 0C). However, significant decomposition of SiC in PM process was observed by several researchers [27, 28]. Kang et al [9] fabricated the SiC/Cu metal matrix composite (MMC) using plasma spray. The authors prepared ball-milled Cu/SiC powder as spraying materials(powder feedstock)at different portions (Cu–27SiC, Cu–50SiC, Cu–60SiC) of SiC powder (<45 µm) and Cu powder (<45 µm). The authors indicated that SiC was decomposed into Si and C, and copper silicide was then formed under plasma spaying. Similarity, several works have been done for decomposition of SiC-Cu powder mixture. Suganuma et al. [29] indicated that when SiC was in contact with Cu, it decomposed into Si and fine carbon at 1100 oC. Lee et al. [30] found the formation of Cu7Si and very small amount of graphite in the interface of Cu and SiC at the reaction temperature of 1100 oC.

In this work, we focus on the third approach, using plasma spraying at low current/power to avoid the degradation of SiC material. Cu sub-micro particles will be mixed with SiC powder as spraying material. These Cu particles are expected not only to bond the SiC particles, but also to protect SiC from degradation during the plasma spraying process. In addition, in this study, we use the inert gas (Argon) to protect both spraying materials and coatings during the plasma spraying process. This idea comes from the fact that Argon can be used as inert/shielding gas in the plasma arc welding.

Figure 2 shows the standard SG-100 gun (a) and customized SG-100 gun (b) for Argon protection of materials and coating during the spraying process. As can be seen in Figure 2, the size of plasma flame with standard gun (Fig. 2a) is much larger than that with the customized gun (Fig. 2b), due to the presence of oxygen in the ambience.

The thickness of the coatings was measured by using Digi-Derm (Model DGE-745, Mituyo, Japan). The apparent porosity of sprayed coatings was determined by using the optical microscopy analysis (Axiovert 40 MAT, Carl Zeiss, Germany), according to the ASTM B276 standard.

To identify the possible phases that present in the powder and coatings, X-ray diffraction (D8- Advance, Bruker instrument, Germany) has been used at temperature of 25°C, with 2θ angle scanningfrom 15˚ to 65˚. The obtained X-ray diffraction patterns are analyzed (using the Eva software) and semi-quantitative evaluation (using Dquant software with an error of ± 3%).

Figure 3 shows the SEM image of as-received SiC particles. As can be seen in Fig. 3, the SiC has an angular morphology for hard particles, with a mean diameter of 40 - 50 μm. To evaluate the elemental composition of this as-received powder, EDX analysis was used (Figure 4). From the EDX spectrum, the content of Si element in this powder ranges from 58 wt.% to 60 wt.%. Whereas, the content of C element ranges from 35 wt.% to 37 wt.%. In addition, Aluminum and Oxygen elements are observed at the contents of 0.6-0.8 wt.% and 4-5 wt.%, respectively.

To identify the phases that present in this powder, X-ray diffraction method has been used. Figure 5 presents the XDR pattern of SiC as-received powder. As can be seen in this figure, XRD of the prepared SiC shows the single phase of SiC was hexagonal (at content of 78.2%). In addition, one weak diffraction peak for SiO2 was observed. 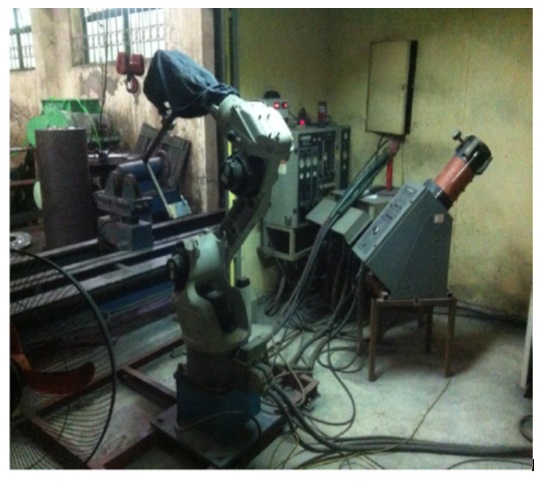 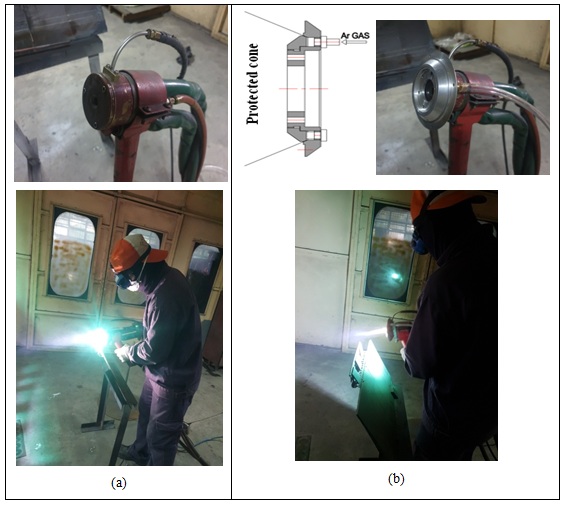 Figure 2: a) Standard SG-100 gun, b) Customized SG-100 gun for Argon shielding of materials and coating during the spraying 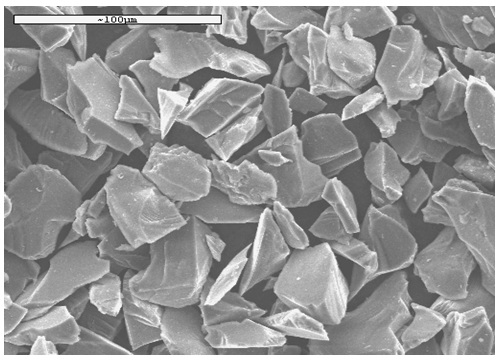 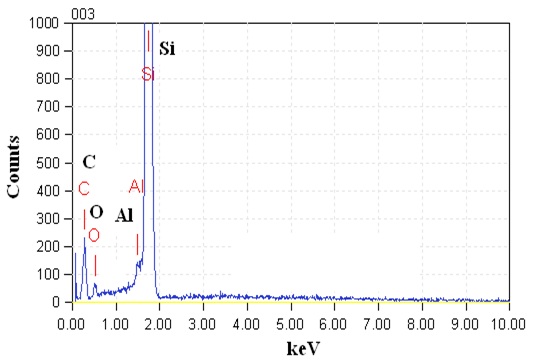 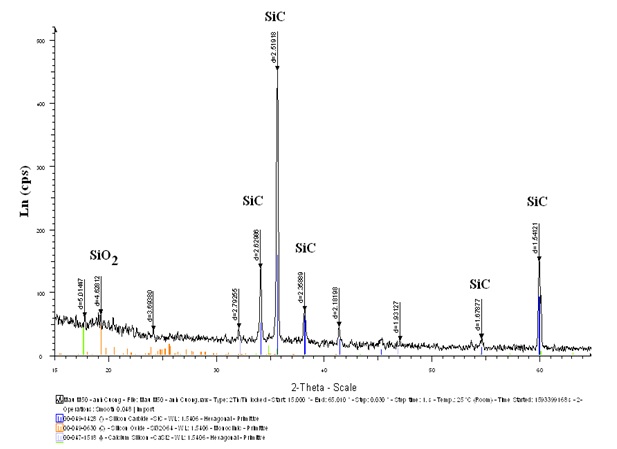 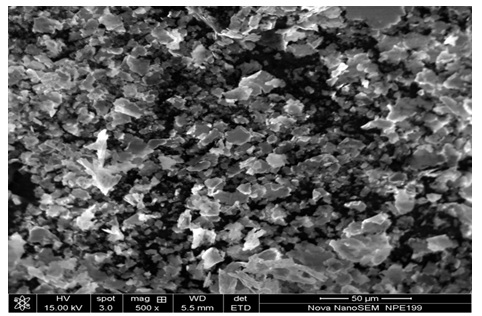 Figure 6 shows the SEM image of as-received Cu particles. As can be seen in Fig. 4, the Cu exhibits as soft flake particles, with a mean diameter of ~1 μm. Figure 7 presents the EDX spectrum for this Cu as-received powder. Calculation from this EDX spectrum indicates that the contents of elements that present in this powder are C (1.38 wt.%); O (0.3wt.%); Fe: (1.5 wt.%) and Cu (96.82%).

SiC-Cu cermet coatings have been deposited on C45 steel substrates with various Cu contents in the powder feedstock (from 10% to 50%) using plasma spraying method (Figure 1). Each sample was sprayed during 5 minutes (Figure 1b), and then its thickness was measured/checked on-site. Figure 8 presents the average values of their thickness. As can be seen in Figure 8, the thickness of coatings is these SiC-Cu coatings is in range of 200-300 μm, with the SiC-15Cu being the lowest (204.67 ± 26.5 µm). This lowest value might be attributed to the lowest content of Cu powder in the feedstock powder. In case of SiC-20Cu coating, its thickness has the highest value (295.67 ± 21.5 µm), whereas it is 220 (± 20.5) µm for SiC-50Cu coating.

We also estimate the thickness by using optical microscope for the cross section of the sprayed coatings. Figure 9 presents the cross-sectional image of SiC-20Cu coating att the optical magnification of 200 times. As can be estimated from this figure 9, the thickness is about 280 µm.

In addition, we had also tried to fabricate the coating at 90SiC:10Cu portion, but no coating had been deposited on the steel surface, due to the low content of Cu powder in the feedstock acting as the binders (to facilitate the bonding of SiC particles under spraying).

In the next parts, we discuss the morphology and elements/phases that present in these coatings. 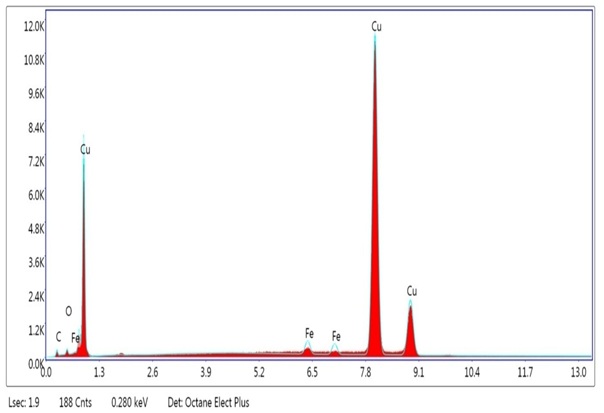 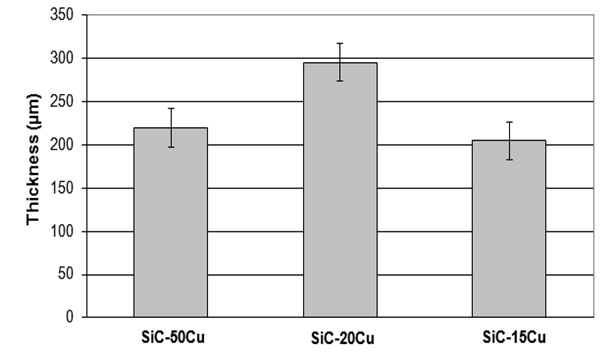 a. SiC-50Cu coating sprayed in air

SEM/EDX/XRD analyses indicate the decomposition of powder feedstock during plasma spraying process due to spraying environment in air (using the standard plasma gun, Figure 2a). Thus, the content of SiC in this SiC-50Cu coating is undetectable or too low (few % ).

To avoid these issues, we use the customized plasma gun (for Argon protection, Figure 2b) and reduce the content of Cu powder in feedstock for other coating samples in the next sections.

b. SiC-20Cu coating sprayed in Argon 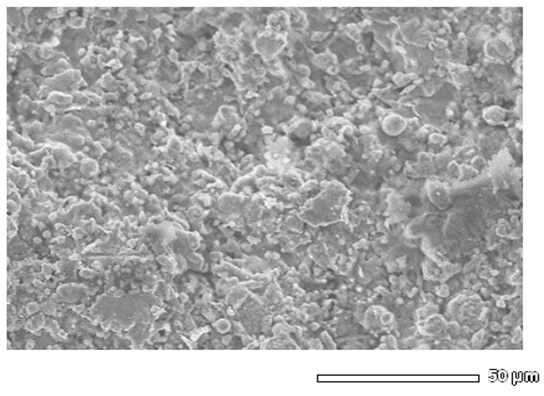 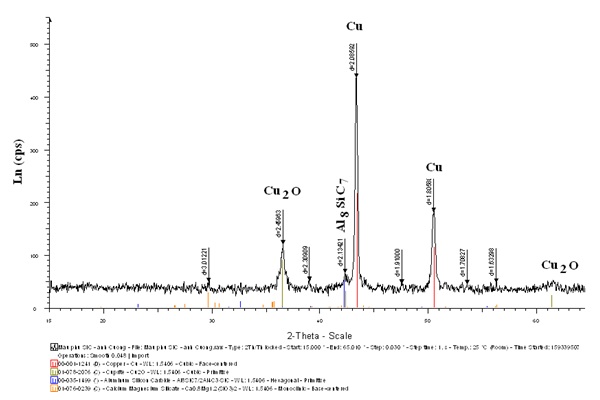 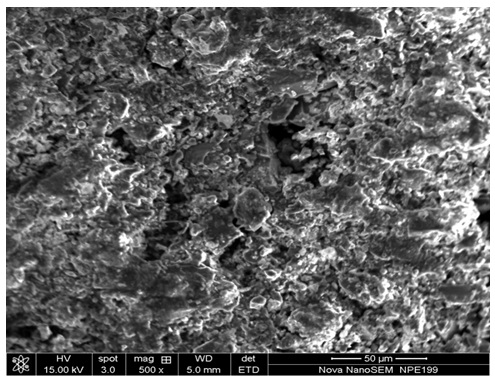 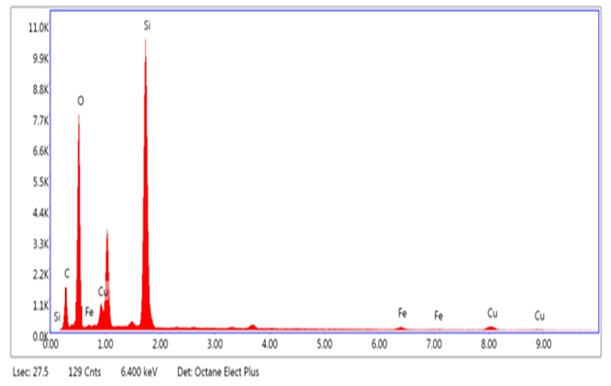 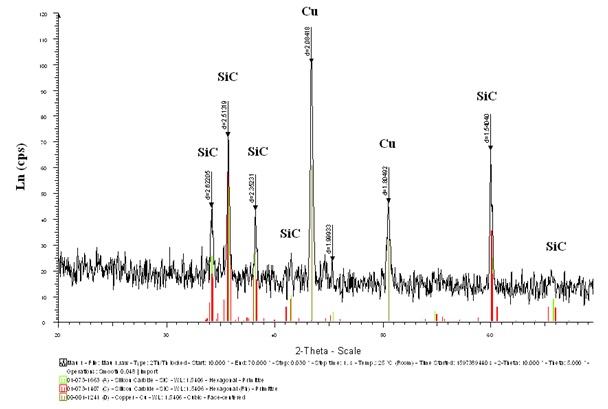 Figure 19 presents the cross-sectional photos of SiC-15Cu coating for evaluation of apparent porosity (taken by an optical microscope Axiovert 40 MAT). From the optical microscopy analysis, the values of apparent porosity are in range from 1.38 % to 1.65 %. This average value is much lower than that for the plasma sprayed Cr3C2-25NiCr cermet coating (from 3.1% to 3.4% [26]). In the previous work [26], we used the Cr3C2-25NiCr powder (35±5 µm) as feedstock, under plasma current of 600 A atmospheric ambiance (spray distance of 100 mm). Reduction of porosity for SiC-15Cu coating could be attributed to the combination of i) the presence of Cu sub-micro particles in powder feedstock, ii) low plasma current of 380 A, iii) short spray distance (50 mm) and iv) Argon gas protection under plasma spraying process.

The presence of Cu sub-micro particles (together with SiC particles) in powder feedstock is not only to bond the SiC particles, but also to protect SiC from degradation during the plasma spraying process, thus reduces significantly the porosity of coating. 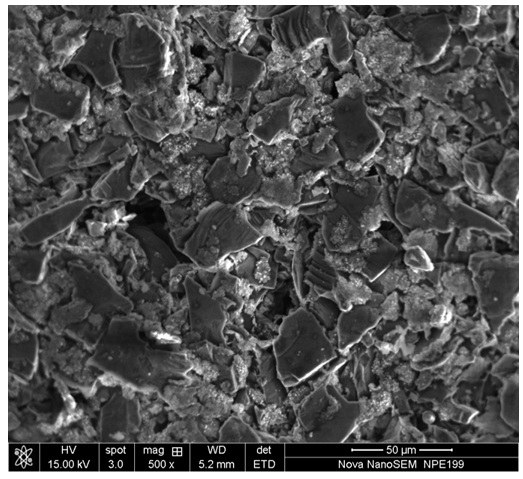 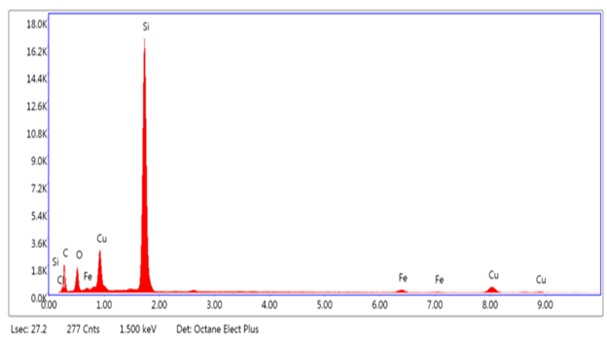 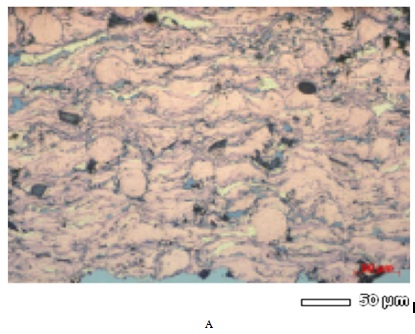 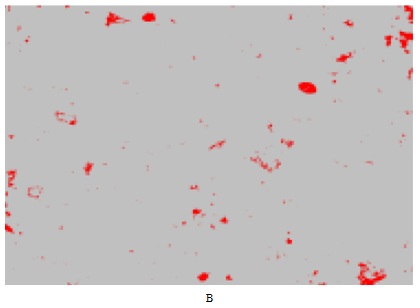 The main findings of this research were:

For the next study:
- For industrial application, SiC-15Cu coatings will be then sealed with polytetrafluoroethylene (PTFE) emulsion to enhance further their corrosion and wear resistances.

- The erosion resistance of this SiC-15Cu coating (with or without nano-PTFE sealant) will be carried out by using a slurry flow (SiC particles in HF/HCl solution) at 70 oC, under rotational speed 950 rpm (Figure 20).

- For industrial application, the nano-PTFE sealed SiC-15Cu coating will be used to protect pump chamber against the apatite sludge solution (Figure 21).