Neoplasm of the ovary may coexist with benign teratoma of the opposite organ. I report from an Ethnic Group in Nigeria the 6 cases which were collected during a period of 30 years at a Reference Pathology Laboratory. As the age range was from 21 to 40 years, the series confirms the uncommonness of teratomas in menopausal females. In contrast, dysgerminoma is shown to feature in younger persons. As bilaterality of neoplasms may occur in the ovaries, attention should be paid during clinical work-up.

Benign teratoma is a relatively common tumor of the ovary. According to Parrington’s associates,[1] it is “formed of fully differentiated mature tissues, often from all three cell layers, and usually comprise a cyst containing sebaceous material, hair, and often teeth.” World-wide reports have covered its association with diverse conditions such as pregnancy,[2,3] mimicking malignancy,[4] forming squamous cell carcinoma,[5] superinfection,[6,7] and menopause.[8] It has been associated with primary carcinoma of the fallopian tube.[9] Its ethnological parameters have even been presented in a South African research.[10]

Research on the teratomas of this organ was previously carried out personally.[11] This was based on surgical specimens received at a Reference Pathology Laboratory that serves the Igbos,[12] one of the major ethnological groups in Nigeria. Here, using the personally kept Laboratory Records let me present how certain tumors coexisted with benign teratomas in the contralateral ovary. A review of the literatures is added. 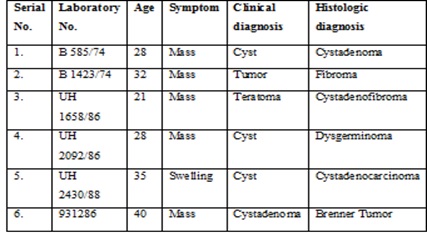 I have experienced 6 cases of various neoplasms coexisting with a benign cystic teratoma of the other ovary. See Table 1. In all probability, the parameters of these patients are worthy of note.

Note was taken of the age range which was from 21 to 40 years (mean 31 years). These are child-bearing years but no case was associated with pregnancy as in the torsion case from Taiwan,2 and the obstruction case from Ethiopia.3 Therefore, this series confirms the uncommonness of teratoma presentating in menopausal females.8

Females of younger ages are those who suffer from dysgerminoma. The single case in this series is consistent with the New York experience of Barber who stated that it is the most common malignant germ cell tumor found in childhood.[13] The 40 years age limit in this series tallies with Jamaican experience,[14] in the United Kingdom,[15] out of 9 malignant tumors recorded in infancy and childhood, as many as 8 were dysgerminomas. In Yugoslavia,[16] out of 15 such malignant tumors, five showed the dysgerminoma pattern.

Pattern of growths in a community is epidemiologically important. If the benign patterns are considered, namely, cystadenoma, cystadenofibroma, fibroma, and Brenner tumor, each of which occurred once in Table 1, they were precisely those highlighted in a large US report.[17] Incidentally, an Israeli paper devoted attention wholly to cystadenofibroma,[18] remarking that “the characteristic pathologic features of this neoplasm justify its separate listing.”

Listing requires that, if neoplastic disease occurs in the one ovary, the state of the contralateral counterpart must be ascertained.[19] Indeed, the frequency of bilaterally of teratoma itself necessitates careful attention.[20] In the US series,[17] out of 103 such cases, [9] (8.7%) were bilateral. It was 10.8% in another US series.[19].

Series have so far been cited from Journals based in the UK,[1,4,15,20] Taiwan,[2] Ethiopia,[3] South Africa,[5,10] USA,[6,8,11,13,17,19] Iran,[7] Korea,[9] Jamaica,[14] Yugoslavia,[16] and Israel.[18] In the present series, the data collected became possible on account of the personal establishment of the histopathology pool recommended by Birmingham, UK, authors,[21] who recommended the importance of epidemiological analysis using such pools. It is concluded, therefore, that ovarian neoplasms may coexist with contralateral benign teratomas. Accordingly, when one ovary is involved, its contralateral counterpart should always be examined at operation and, if necessary, biopsied. In other words, whatever the advance in therapy it should take into account the state of the contralateral organ.