Tuberculosis is an infectious airborne disease caused by a bacterium that affects the lungs and other parts of the body. The existing first line drugs such as Isoniazid and ethambutol shows only profound binding affinity with the target protein. Therefore, new or modified drugs with better docking approach that exhibit a closer and stronger binding affinity are essential. Lipoate biosynthesis protein B (LipB) is found to play vital role in the lipoylation process in Mycobacterium tuberculosis and thus making it a very promising drug target. This   present study opens up a novel approach towards (E)-N’-benzylideneisonicotinohydrazide derivative which have been reported as better anti-tubercular agents. In this article, a computational approach was employed to understand the binding interaction between the inhibitory compounds and the LipB protein of M tuberculosis. The Molecular docking analysis showed that compound (ligand 2) has the highest binding affinity of (-10.5 kcal/mol) which was able to bind with binding pocket of the target protein. This finding could be helpful for the design of new more potent anti-tubercular tuberculosis analogs.

Mycobacterium tuberculosis is a bacterial species responsible for tuberculosis (TB) infection. It mainly affects the lungs and capable of affecting other parts of the body such as spine, kidney and even the brain unless timely treatment is provided. TB remains one of the most infectious diseases resulting in a worldwide death of 1.4 million and an estimated new case of about 8.7 million yearly. The typical symptoms of TB are chronic cough with blood tinged sputum, fever, weight loss, night sweats and if untreated on time can result to death ultimately [1].

There are drugs like isoniazid, rifampicin and ethambutol available for curing tuberculosis. However, emergence of multidrug resistant (MDR) and extensively drug resistant (XDR) tuberculosis that resist current drug calls poses a big challenge towards successful treatment of tuberculosis [2]. This in turn drives the current research to a faster pace in order to develop new therapeutics against the diverse strains of M. tuberculosis [3]. There are several enzymes that participate in the pathogenicity vital metabolic process. Such metabolic process includes the like growth of the bacterium and one of them is Lipoate biosynthesis protein B (LipB). LipB is an enzyme that is involved in lipoylation; it catalyzes the transfer of endogenous octanoic acid to lipoyl domains by way of a thioester bond to the 4’- phosphopanthetheine cofactor of the acyl carrier protein (ACP).The octanoyl derivatives are then converted into lipoyl derivatives by another enzyme known as lipoyl synthase (Lip A) thus finding a way to serve the need of the bacteria for exogenous lipoic acids [4]. Thus it acts as the necessary protein involved in activation of the cellular machines that drives the bacterium’s metabolism. Moreover, an up regulated level of Lip B has been observed in patients infected by multidrug resistant forms of M. tuberculosis and no other known back-up mechanism that can take over LipB’s role in the metabolism of TB [5,6]. Furthermore, generating a mutant lacking LipB gene resulted in a less virulent and defective bacterium confirming the theory of importance in the growth of M. tuberculosis thus making it a viable target for developing anti-TB drugs [7].

Drug screening against TB has been done for years now showing success at varying rates but in recent times there had been severe limitations in experimental approach due to the requirement of high level scientific expertise with costly laboratory settings for handling pathogens like M. tuberculosis. However, development in computation methods in the recent times have taken some interesting turns. In the past, drugs have been discovered through identification of active ingredients from traditional remedies or by unexpected discovery [8]. With the help of computational methods basic knowledge regarding the ligand and receptor can be acquired beforehand and also illustrate the interaction between the inhibitor ligand and the target site. These actions are very much useful in molecular docking, structure and ligand based drug screening and many more.

Computational approach also helps to evaluate the binding affinity between a ligand and its receptor thus helping to prioritize drug candidates for screening experimental approach. Protein ligand docking is a computational method developed to interpret the preferred orientation between two molecules in order for them to form a stable complex; indeed it plays a key role in computer assisted drug design. Success rate of docking can be predicted using a scoring function that ranks candidate docking correctly by predicting the strength of association or binding affinity between the two molecules. The scoring functions are based on the molecular mechanical force fields that estimate the required energy [8].  Molecular modeling investigations were carried out with the aim of understanding the binding mode and the bind interaction of the (E)-N’-benzylideneisonicotinohydrazide derivatives into the active site of LipB of M. tuberculosis.

The molecular docking studies was carried between (E)-N’-benzylideneisonicotinohydrazide derivatives and M. tuberculosis target site (LipB). The molecular structures of the inhibitory compounds presented in Table 1 were obtained from literature [9].

The crystal structure of  LipB used in the study was obtained from protein data bank with PDB code 51BG which was obtained by X-ray diffraction method. Crystal structure of LipB was prepared by removing all bound substances (ligands and cofactors) and solvent molecules associated with the receptor. The prepared receptor was then saved in PDB file format which is the recommended input format in Pyrx and Discovery Studio Visualizer software. The prepared receptor was transported into the Pyrx software in order to make it a macro molecule [10]. 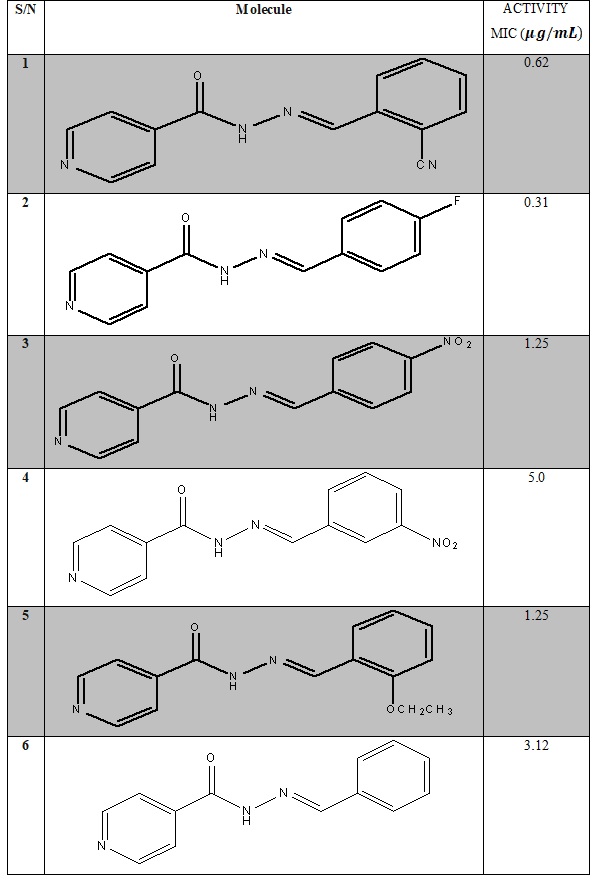 Table 1: Molecular structure of (E)-N’-benzylideneisonicotinohydrazide derivatives as potent anti-mycobacterium tuberculosis and their activities.

Preparation of the ligands ((E)-N’-benzylideneisonicotinohydrazide derivatives)

The inhibitory compounds were firstly optimized with Spartan 14 software at Density Functional Theory (DFT) level in order to attain the most stable conformer of the inhibitors at minimum energy. The optimized structure were then saved in PDB file format and transported into the Pyrx software in order to make the inhibitors as micro molecules (ligands) [10]. 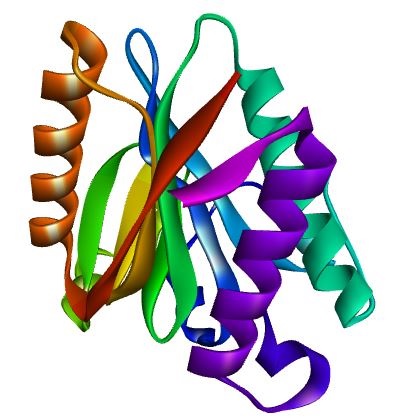 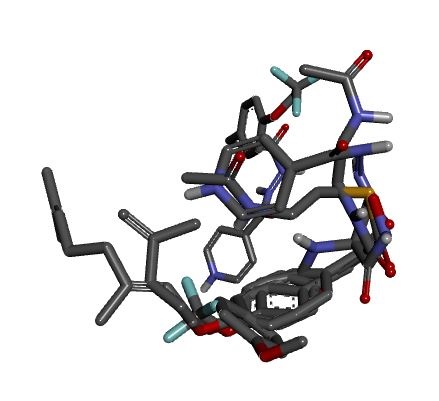 (B) 3D structures of the prepared ligands.

Molecular docking studies were carried out in order to elucidate the interaction and the binding mode between the target (LipB) and (E)-N’-benzylideneisonicotinohydrazide derivatives as a potent  anti-tubercular agents. All the compounds were found to strongly inhibit by completely occupying the active sites in the target protein (LipB). For target protein, binding affinity values for all the compounds ranges from (- 4.5 and 10.5 kcal/mol) as reported in Table 2. However compound (ligand 2) has the highest binding affinity of (- 10.5 kcal/mol) compared to other co-ligands . Therefore only compound (ligand 2) with prominent binding affinity was visualized and analyzed in Discovery Studio Visualizer as shown in Figure 2 and 3 respectively. The ligand formed three hydrogen bonds (2.63843, 2.47275 and 2.79065 A˚) with LYS136, VAL79 and CYS170 of the target site. In addition, it also forms hydrophobic bond with LYS136, PRO169, VAL177, PRO169, TRP182, TRP182 and ALA233 of the target site.

Table 2:  Binding Affinity, Hydrogen bond interaction and hydrophobic interaction formed between the ligands and the active site of the M. tuberculosis 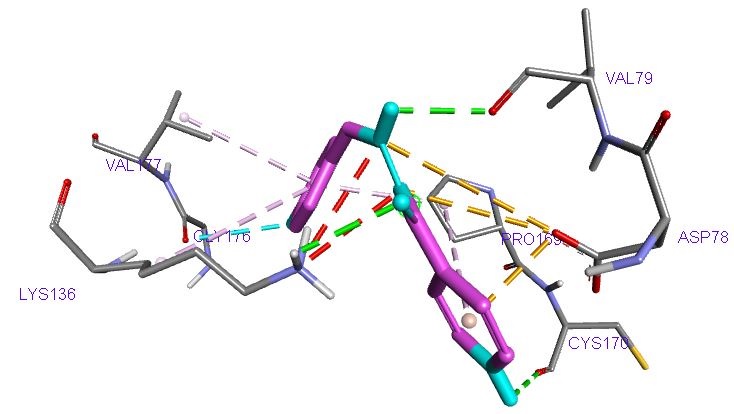 Figure 2: 3D interactions between LipB of M. tuberculosis and Ligand 2. 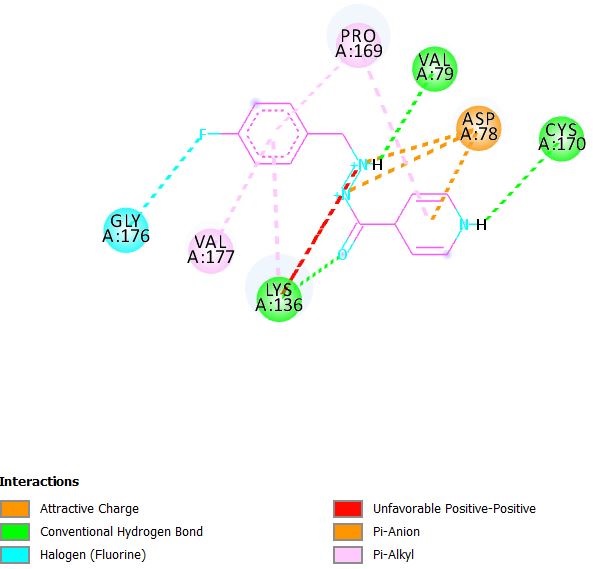 Figure 3: 2D interactions between LipB of M. tuberculosis and Ligand 2. 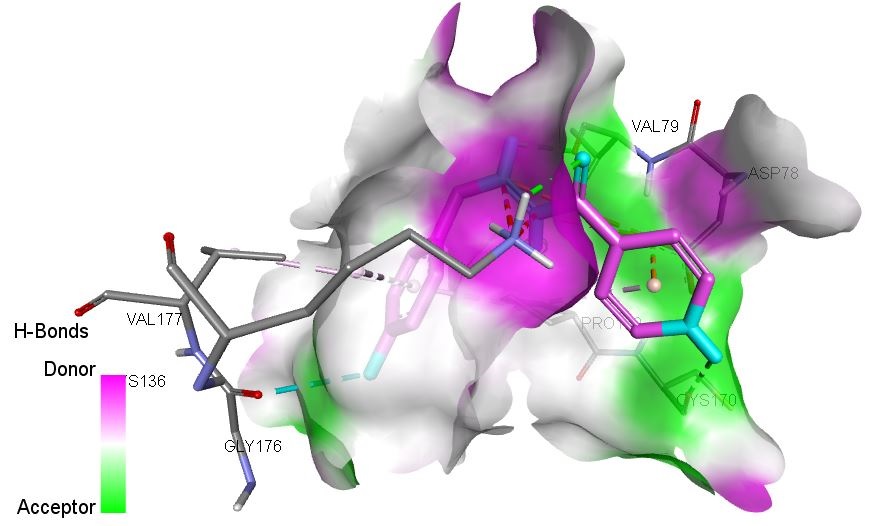 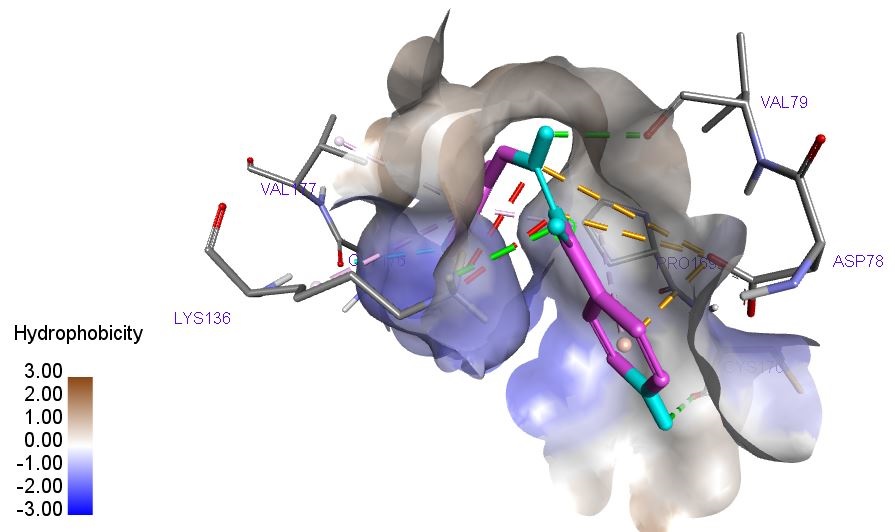 Analogue of (E)-N’-benzylideneisonicotinohydrazide derivatives were evaluated against mycobacterium tuberculosis target (LipB).  The binding affinities of these compounds correlate with their biological activities. Compound (ligand 2) was found to have the most promising binding affinity values of (-10.5 kcal/mol). In conclusion, this study showed that compound (ligand 2) of (E)-N’-benzylideneisonicotinohydrazide derivatives could serve as better anti-tuberculosis drug and need further in-vitro investigations to confirm their actual therapeutic potential efficacy and drug ability towards the disease.