Dicycloplatin (DCP) is a platinum anticancer drug approved by the Chinese FDA. Its side effects are more bearable than those of cisplatin and carboplatin. The bladder cancer patient presented here was diagnosed at West Virginia University (WVU), USA and received eight weeks DCP chemotherapy in Beijing. The patient experienced moderate fatigue and aches but no vomiting, hair loss, serious myelosuppression, or other toxic effects. His immune system remained largely intact. Quarterly surveillance at WVU found no tumor recurrence. Of note, the patient only received DCP during his course of treatment since diagnosis. Molecular mechanism studies at WVU found that DCP-induced activation of DNA damage signaling occurred in cancer cells but not normal cells. Studies in China report similar findings. These data are consistent with clinical observations of bearable side effects, possibly due to DCP’s molecular design - specifically, four hydrogen bonds attaching its ligands - which might also play a role in DCP's apparent targeting of cancer cells. In conclusion, clinical observations and molecular mechanism studies indicate dicycloplatin is a promising drug in cancer chemotherapy. Clinical investigation of DCP in the United States and other countries is warranted.

Platinum drugs remain a cornerstone of chemotherapy for many cancers, including bladder cancer when immunotherapy fails to secure remission. However, the adverse effects of cisplatin and carboplatin are often severe, causing some patients to stop treatment. Toxic effects such as myelosuppression, nephrotoxicity, hepatotoxicity, neurotoxicity, and nausea and vomiting are often constraints to full dosage and long-term use.

Dicycloplatin, developed in China and approved by the Chinese FDA in 2012, is a potent platinum drug with apparently low toxicity and broad-spectrum effectiveness. It shows better solubility and stability than cisplatin and carboplatin. Preclinical in vitro and in vivo studies and a phase I clinical trial found greater antitumor activity and fewer adverse events than carboplatin. Phase II clinical trials in 240 patients with advanced non-small cell lung cancer found efficacy and safety of DCP-plus-paclitaxel comparable to carboplatin-plus-paclitaxel, but with better drug tolerability. DCP is a supramolecule with four hydrogen bonds that may play a role in its apparent targeting ability and diminished toxic impact [1,2].

Bladder cancer (BC) causes 170,000 deaths annually worldwide. More than 50,000 men and 16,000 women are diagnosed each year in the USA [3,4]. Approximately 70 percent of new urothelial bladder cancer cases are non-muscle invasive tumors, typically removed by complete transurethral resection [5]. Intravesical immunotherapy with Bacillus Calmette–Guérin (BCG) is the standard treatment of such tumors (T1, Ta) if diagnosis is high-grade urothelial carcinoma or in the event of large tumors or multifocal disease. BCG is the most commonly used agent. Some studies suggest that BCG is superior to standard chemotherapy. However, rate of recurrence after adjuvant BCG treatment in bladder cancer is about 50% (90% without BCG) [6-10]. Untreated non-invasive tumors may infiltrate the muscular wall, requiring cystectomy and urinary diversion into an isolated bowel loop or substitute bladder. For muscle invasive BC, the standard treatment is partial or radical cystectomy depending on tumor number and size [11-13].

​In June of 2016, a 65-year-old American Caucasian male with increasing hematuria over a 4-month period was seen at West Virginia University Hospital in Morgantown. CT-Urography and cystoscopy showed a 1.5 cm bladder mass. Transurethral resection was performed on June 30. The pathologic diagnosis was non-invasive, high-grade papillary urothelial carcinoma involving the right lateral wall, Stage Ta. BCG and surveillance cystoscopy were discussed [14].

The patient is a former smoker. His mother died of ovarian cancer at age 50 and his father had advanced prostate cancer at the time of his death at age 81 from other causes. The patient’s family history and his familiarity with DCP through his work as a medical writer led him to decline BCG treatment but elect quarterly surveillance at WVU after DCP chemotherapy. In mid-July, the patient traveled to Beijing, China, where he received eight weekly DCP IV infusions.

The patient was evaluated by a Chinese oncologist at People’s Liberation Army General Hospital (also known as Beijing 301 Hospital); consent forms were signed. Baseline blood counts and chemistry were evaluated prior to chemotherapy, then weekly the day before each treatment.

The DCP treatment protocol began with omeprazole and reduced glutathione sodium dissolved separately in 100 ml of 0.9% saline solution and infused, their purpose according to medical staff to protect the liver and kidneys. An intramuscular injection of diphenhydramine was given before each treatment. Dicycloplatin 300 mg was dissolved in 250 ml 5% glucose solution and infused over one hour. The patient was treated in the Day Ward of the Tumor Building at Beijing 301 Hospital and observed for 30 minutes afterwards.

The patient received 300 mg of IV-DCP weekly for 8 weeks. In addition, he received An-Tuo-Ke-Jin, the oral formulation of Dicycloplatin, 12 capsules a day for an equivalent of 36 mg/day for 1.5 months to achieve the approximate standard DCP dosage administered over eight weeks [14].

Adverse effects of DCP in this patient included mild nausea at the outset, moderate fatigue, and (in the last 2-3 weeks) back and leg aches. There was no emesis or hair loss.

The patient returned to the United States for regular surveillance at West Virginia University Hospital. CT IVP was performed on August 3, 2017, thirteen months after resection; no upper tract or metastatic lesions were visualized. Cystoscopies every 3 months up until Nov 2017 showed no evidence of tumor recurrence.

Of note, the patient only received DCP chemotherapy during his course of treatment since diagnosis.

Figure 2 shows images taken during cystoscopy before tumor resection (top panels) and after resection (2nd panels) on June 30, 2016. The resection site in the bladder was observed one year after dicycloplatin chemotherapy and seventeen months after diagnosis. Images of the site are shown in the 3rd and bottom panels. 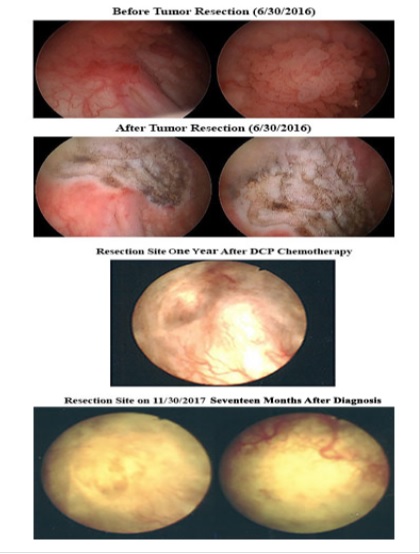 s we know, chemotherapeutic drugs do not distinguish between normal and cancer cells, causing toxic side effects when normal cells are affected. 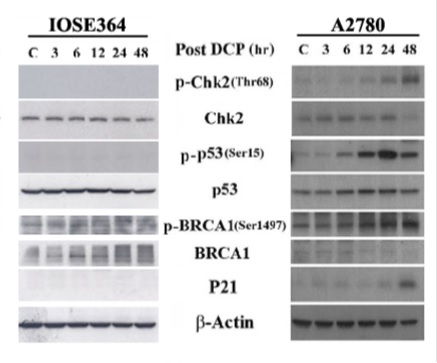 Figure 3: DCP in Ovarian Normal and Cancer Cells: DNA-damage response induced by dicycloplatin (DCP) in normal ovarian epithelial IOSE364 cells and ovarian cancer A2780 cells. Cells were treated with dicycloplatin at IC50 doses for 1 h, then washed and re-incubated in drug-free media for the indicated times. Proteins were extracted, separated by polyacrylamide gel electrophoresis (PAGE), transferred onto PVDF membrane, and probed with the indicated antibodies.

In vitro investigations in China also indicate that DCP mainly affects tumor cells. Using Atomic-Force Microscopy, researchers observed that unlike oxaliplatin, which alters DNA of normal cells, dicycloplatin did not affect single DNA molecules of normal cells (data not shown). In another study, DCP mainly affected lung carcinoma and melanoma cells but did not affect or only slightly affected dermal fibroblast and mammary epithelia normal cells (data not shown) [15,16].

DCP has sustained remission in this patient with bladder cancer for more than 17 months. The adverse effects profile was bearable with minimal myelosuppression. DCP appears to be a promising chemotherapeutic agent, justifying further clinical investigations.

The authors thank Michael D. Mueller for his special contributions to this research and for editorial assistance. We also thank DCP Project President Mr. Baoyu Qiu for important financial support and Professor Xuqing Yang for his scientific guidance.