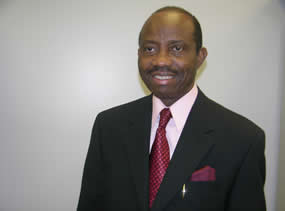 Dr. Ebomoyiis the chairperson for the Department of Health Studies at the Chicago State University. He received his post-doctorate certificate from the World renowned, National Institutes of Health, MD, in genetic epidemiology and a PhD from University of Illinois at Urbana-Champaign, Illinois, USA; where he studied Public Health and Statistics. Currently, he is a professor of Epidemiological Science at the Chicago State University, Chicago Illinois. He taught biostatistics at Tufts Medical School in Boston. In1990 he was appointed as the director of sickle cell research center and an adjunct professor of Pediatrics at the Tulane University Medical center in New Orleans, Louisiana.  He served under Mayor Jerry Wones, as Air Quality Commissioner for the City of Greeley, Colorado. He also taught epidemiology and biostatistics at the University of Northern Colorado in Greeley Colorado in the Department of Community Health and Nutrition.  He now serves as an Editorial Board Member of several reputable journals. He is an Editorial Board Member of  International Journal of Medical Engineering and Informatics, Chief Editor, of the International Journal of Tropical Disease, Academic Editor, Journal of Advances in Medical and Pharmaceutical Sciences and Health, Chief Editor of Journal of Basic and Applied Scientific Research (JBASR); Chief Editor of the Journal of Applied Environmental and Biological Sciences [JAEBS] and the Associate Editor of the International Journal of Social Health Information and Management, an Editorial Board member of Journal of Blood Disorders and Transfusion, and the British Journal of Applied Science and Technology. He is a reviewer for numerous national and international journals. He is the author of three textbooks and a coauthor of a fourth book. The titles of his books are: (1) Public Health Genomics and International wealth creation IGI Global,IgI. Global Publishing Company, Hershey Pennsylvania, USA Pages: 1-463 ISBN13: 97814. (2) Globalization, Health and Human Rights (Iowa Kendall Hunt publishing company, 2011); (3) Community Medicine A global Perspective (Star press, 1996; Belmont CA) (4). Epidemiology for Public Health Professionals with professors Emmanuel Osunkoya and S.  Amuwo (Iowa, Kendall Hunt publishing company,2011).He holds one federal patent and has published over one hundred peer-reviewed scientific manuscripts in medical, engineering, biosocial, epidemiological, health education and statistical journals. Also, he has presented over forty peer-reviewed manuscripts in conferences held in United States and other part of the world.  He is a member of The American Public Health Association, The NIH Consensus Development Program and the National Coalition for Health Professional Education in Genetic servicesand, The American Public health Association (APHA) Genomic Forum. He serves as an external dissertation examiner for GITMA UNIVERSITY,VISAKHAPATNAM INDIA. Based on his research and scientific training, he has received several awards and honors, such as: Who’s Who in the World,Who’s Who in America, Who’s Who in science and Engineering and Who’s WHO among Executives & Professionals (2014), American Association for the Advancement of Science Fellowship and the teacher of the year in the following years, 2012-2011, 2010, 2008, 2007 and The Favorite Professor published by Mortar Board, Inc., 2004.  By 2012,Dr. Wayne Watson, former president of Chicago State University presented to him the CSU Faculty Excellence AWARD.