Upconversion nanoparticles capable of converting near-infrared light to visible/UV light are being proved to be efficient in photodynamic therapy. Recently, their multipotent roles as nanocarriers, nanoprobes and transducers has extended their sustained use in diagnosis, imaging, treatment of diseases and many more which are reviewed below.

Photodynamic therapy (PDT) is emerging as a promising therapeutic modality in the treatment of cancer.  PDT is also used in the treatment of cardiovascular diseases like atherosclerosis and restenosis [1].  The success of this therapy depends on three components namely, photosensitizers (PSs), light and tissue oxygen.  PSs are inert, non-toxic light sensitive molecules, which when exposed selectively to light excites their electrons to higher energy level and these electrons converts the adjacent tissue oxygen to cytotoxic reactive oxygen species (ROS).  ROS (includes singlet oxygen species, peroxides) thus generated in excess damage proteins, lipids and nucleic acids ultimately ending up in cell death. The photochemical reaction of PSs and their application in biological tissues depends on the intensity and wavelength of light.  UV-Visible light has limited penetration depth into tissues.  Therefore, conventional PDT using UV-Visible light (400 – 750nm) to excite PSs (eg. Porphyrins like porfimer sodium) is limited to superficial and flat tumors/lesions.  Near infra red (NIR) (750 - 900nm) with longer wavelength than UV-Visible light has a greater penetration depth in tissues and hence PSs sensitive to NIR (eg. Zinc pthalocyanin, Aluminium sulphophthalocyanine) can be used in PDT of solid tumors.  However those NIR sensitive PSs were not efficient as UV- visible PSs.

Thanks to the lanthanide elements (NaYF4: Yb, Tm) from which the inorganic luminescent materials called upconversion nanoparticles (UCNPs) are synthesized.  These UCNPs absorb NIR light and emit UV-Visible light and hence act as transducers.  Currently, the efficacy of these UCNPs conjugated with suitable PSs to treat deep-seated solid tumors are being investigated.  NIR light reaches deep tissues and excite UCNPs to emit UV-Visible light which further activates PSs to produce ROS, causing cell death by apoptosis [1,2]. UCNPs thus have the advantages of serving as transducers, carriers of PSs with good stability and as an upconversion luminescence imaging (UCL) agent simultaneously with near zero photobleaching and photoblinking effects [3-7].

Researchers have developed UCNPs coupled PSs encapsulated in silica/ZnO/ or TiO2 core shell [8-10], UCNPs-PSs loaded PEG coated polymeric lipid vesicles [11, 12] and many similar nanoconstructs.  These nanoconstructs showed good results in PDT.  Hypoxic region of solid tumors were effectively treated with manganese oxide (MnO2) nanosheet anchored UCNPs in PDT.  2D nanomaterials (eg. graphene, MnO2) possess great advantages in structural control and flexibility, can respond sensitively to internal/external stimuli and so on [13, 14]. MnO2 can generate great deal of oxygen and hence when anchored on UCNPs, provides enough oxygen to get converted to ROS [14]. Thus UCNPs based nanoconstructs can be used in oxygen dependent therapies like PDT and Radiotherapy.

To enhance the targeting of UCNP-PSs towards tumors more specifically, tumor specific RGD peptide c(RGDyK) was conjugated with UCNP-PSs [15]. This possessed a deeper therapeutic depth and successful therapeutic effect following NIR laser irradiation in tail vein of tumor-bearing U87-MG mice [15]. However complete elimination of tumor cells are yet to be achieved.  The UCNP based nanoconstructs are loaded with drugs and are being developed to overcome multidrug resistance (MDR) [16] Tirapazamine (TPZ), a bioreductive prodrug loaded nanoconstructs showed much enhanced cytotoxicity and suppressed tumor growth than the UCNP-PSs without TPZ.  The UCNP-PSs first induced cytotoxicity by the production of ROS and soon when the tissue oxygen got depleted (hypoxia), TPZ got activated and resulted in much – enhanced cytotoxicity [17]. Bifunctional doxorubicin (DOX) loaded NaYF4: Yb/Tm - TiO2 inorganic photosensitizers triggered PDT and enhanced chemotherapy. This combination of PDT and enhanced chemotherapy helped to overcome multidrug resistance (MDR) in breast cancers [18].

The importance of UCNPs are being exposed by the development of many similar above reviewed multipotential nanoconstructs [23-26] that could effectively carry out combinational therapies like PTT, PDT, and enhanced chemotherapy for cancer and serve as bioimaging agent simultaneously. This most potential UCNPs nanoconstruct theranostic agent involved PDT is surely superior to any individual therapy for cancer.

Thus Lanthanide doped UCNPs with promising roles in diagnosis of diseases like cancer, rheumatoid arthritis [27], treatment methods like PDT, PTT and radiotherapy, imaging techniques like UCL, multimodal imaging like CT, MRI and PET, makes them a multifunctional theranostic agent for cancer and other diseases [28]. These creditable roles are due to their nanosize, ability to accommodate drugs, affinity ligands, imaging moieties, other nanoparticles and so on.  Above all, their tunable photon upconversion ability promotes them to be highly efficient with wide applications in biosensing, bioassays, dendritic cell based immunotherapy [29], solar energy conversion [30] and in forensic science [31].

With the rapid development of nanotechnology large numbers and many types of nanomaterials have been produced and are being synthesized.  Success of a nanomaterial is only when it makes headway to commercial use after passing the clinical trials. Though numerous studies report negligible or low toxicity of lanthanide doped UCNPs [32], in vivo use in human is still questionable due to paucity of nanotoxicological studies.  On the other hand attempts are being made to improve the biosafety of UCNPs by methods like phosphonate coating [33] and many more under research. Besides these, however the excellent performance of UCNPs as nanocarrier, nanoprobe, imaging agent and transducer will sustain them the highly efficient inevitable among several competing nanoparticles. 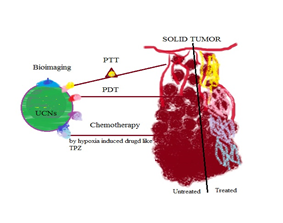