Currently there aren’t any remedies to target cancer cells selectively. Most drugs that exterminate rapidly proliferating cancer cells can also eradicate normal healthy cells. Even monoclonal antibodies (mAbs), present best treatment modalities in the targeted cancer immunotherapy, fail to destroy cancer cells specifically and a lot of mechanism-dependent or independent toxicities have been reported. Targeting tumor cells specifically needs necessary strategies to progress the cancer therapies. Advanced researches in cancer biology have been illustrated that cancer cells have usually some genes that are over- or under-expressed. To exterminate tumor cells specifically, the current effort puts forward a novel strategy to target cancer cells more selectively using Enzyme Activated Prodrugs (EAP), which can be activated by over-expressed enzymes of cancer cells. Mutations in genes and chromosomes are known triggers for the development of human cancers. The mutations in gene profile could over- or under-express several enzymes which can be used in cancer targeting by EAP.

Cancer, called malignancy as well, is a class of diseases described by out-of-control cell proliferation. According to the announcements of World Health Organization (WHO), cancer is the second leading reason of death worldwide (around 13% of all deaths in 2008). The disease arises from transformations in the genome of a normal single cell in a multistage process. Management is not accomplished with a single therapeutic; patients often get a combination of therapies dependent on the type and stage of cancer. Predominantly, management of cancer includes the utilize of several modalities of therapy including: palliative care, surgery, radiation, gene therapy, hormone therapy, immunotherapy and chemotherapy [1].

Nowadays, chemotherapy is the main management of cancer. However, its success is imperfect due to numerous drawbacks, including systemic toxicity, low therapeutic index, lacking drug concentrations in tumors and absence of specificity for tumor cells over normal cells [2]. Various strategies have been utilized to overcome these problems, including: resistance modulation, alternative formulations, gene therapy, and antidotes/toxicity modifiers. One talented area for targeting tumors specifically is enzyme prodrug therapy. It is hypothesize that EAPs can help to overcome adverse effects of canonical chemotherapeutic agents.

Mutation is an alteration in genome of an organism which results from unrepaired injury to DNA or RNA genomes, the event which is ordinary in cancer. These molecular mutations may consequence in misregulation or disturbance of normal gene function, which results over- or under-expression of some enzymes [3]. For instance, alterations in the 5’untranslated region of mRNAs may prime to an up-regulation of the enzyme [4]. Mouse double minute 2 homolog (MDM2) enzymes, a negative regulator of the p53, have been assessed overexpressed by as much as 100-fold in a variety of tumor cells [5].

Prodrugs are inactive or less active molecules, which undergo chemical or enzymatic biotransformation altering to an active pharmacological agent in body [6]. Since a large number of potential drugs or drug candidates have undesirable properties such as inadequate site specificity, low absorption, unfavourable distribution, toxicity and short duration of action, prodrugs should be considered as one potential solution in the early stage of drug design and development [7].

Study on a different class of prodrugs developed antibody-directed enzyme prodrug therapy (ADEPT). ADEPT is mostly used to achieve two goals: First, an enzyme antibody conjugate is administered and allowed sufficient time to bind to tumor cells and to be cleared from the circulation. Afterward, a prodrug is administered and selectively activated extracellularly at the tumor site. The most broadly employed application of ADEPT is in cancer target therapy, where the cytotoxic agents are administered in an inactive (prodrug) form after unbound mAb-enzyme is passively or actively removed from circulation. The prodrug can be activated selectively by the mAb-enzyme conjugate on the surface of cancer cells and destroy them. Meanwhile, significant progress has been made with ADEPT methods, since that is possible to plan prodrugs that are not activated by human enzymes by using enzymes of nonhuman origin [8, 9].

Charing Cross Hospital, London, carried out the first pilot-scale clinical trial of ADEPT using an anti-CEA F(ab′)2 monoclonal antibody conjugated to the carboxypeptidase G2 (a bacterial enzyme) [10]. Subsequently, the Royal Free Hospital, London, used the same structures as in the Charing Cross Hospital trial however with a modified protocol to improve pharmacokinetic properties [11]. There is many other known ADEPT (Table 1) and scientists are constantly carrying on characterizing novel ADEPTs for cancer targeting. 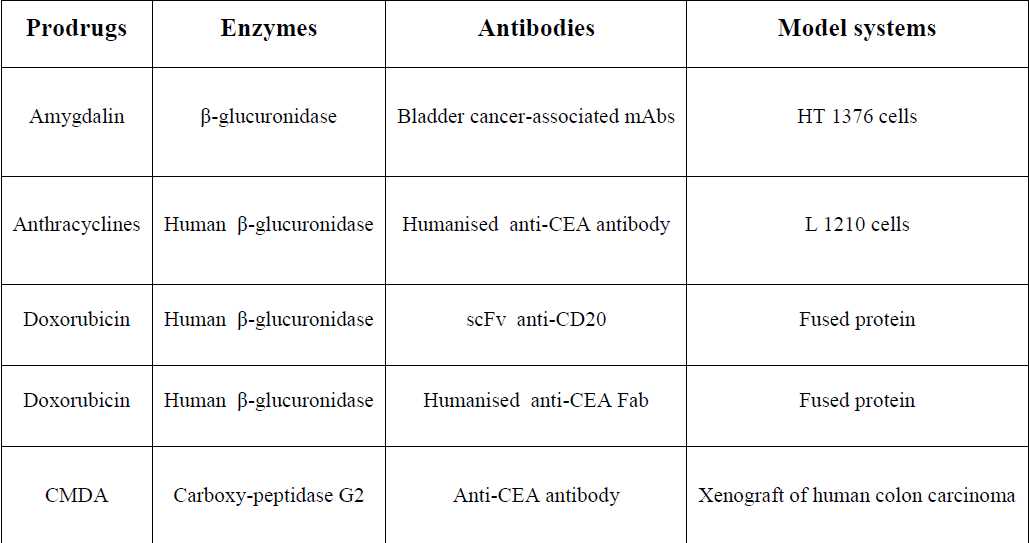 In these two approaches, genes encoding prodrug-activating enzymes are targeted to tumor cells followed by prodrug administration. In GDEPT, nonviral vectors such as cationic peptides, lipids, or naked DNA, are utilized for gene delivery. In VDEPT, gene targeting is talented by viral vectors, with adenoviruses and retroviruses being the frequently used viruses. For both of the strategies the vector has to be internalizing to the target cells, and the enzyme must be expressed firmly in tumor cells. In addition, the prodrug must penetrate the cell membrane to be activated intracellularly. Anyway all of the strategies are abiotic for target therapy. The main outcome of such abiotic strategies is lack of the required specificity; therefore it seems unlike to acquire a 100% cure.

In order to target cancer cells specifically and decrease the side effects of chemotherapeutic agents in targeted cancer therapy, we hypothesize a novel concept of using prodrugs against the tumor cells with over-expressed enzymes.

Up until now, almost all the chemotherapeutic agents are used to destroy cancer cells could also destroy normal healthy cells too. The present paper aims to consider a novel strategy to slay cancer cells specifically by EAPs.

The targeting system of EAPs has several parts. Two effective and most important parts are: a toxic part and a quencher. Based on the specific expression of enzymes caused in chromosomal mutations, in cancerous cells, EAPs can be activated by the over-expressed enzymes. This specific activation of EAPs can initiate intracellular signaling pathways which lead to the apoptosis and cell death. Furthermore, the alteration can change the molecule structure and charge which can reduce efflux phenomenon by the overexpressed pumps of cancer cells (an important reason of drug resistance) [13]. In normal cells, however, there will not be any cytotoxicity and cell death due to lack of the over-expressed enzymes (Figure. 1). The hypothesized EAPs must have another portion in which removal of the part (by enzymes under-expressed in cancer cells) create molecules that can be safely utilized by the normal cells. Indeed the molecule should acts such as a “Biactive Key” which opens a death path in the cancerous cells and locks it in the normal cells. 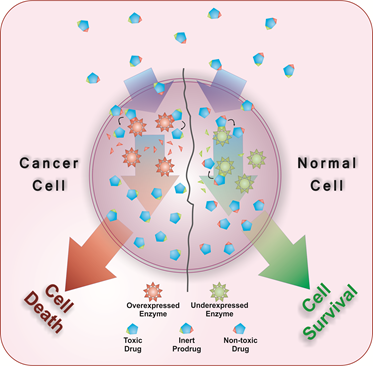 The aim of this article was to introduce an innovative strategy in destruction of cancer cells specifically, which commonly are differentiated from normal cells by expression level of some proteins and enzymes. We envision this notion upon translation into clinical use can significantly improve patients’ treatment and cure in clinics. It has been postulated that cancers developed by chromosomal mutations can over-express some tumor-specific enzymes and under-express some others which are useful in cancer targeting. In addition to invention and or production of the Molecules, it should be noted that scientists should be partly focused on recognizing novel molecular mutations that occur in cancer cells with the hope that the information will accomplish innovative cures in targeted cancer therapy.