In this article, we report the synthesis, optical and electrical properties of pure ZnS and Cu-doped ZnS nanoparticles. The ultraviolet-visible spectroscopy and steady-state photoluminescence suggested that the band gap of the pure ZnS occurs at ~3.75 eV, while the Cu-doping introduce a significant red shift in the absorption and emission spectra. The photoluminescence spectrum exhibited much wider emission with an additional feature peaking at ~3.51 eV. This feature in the photoluminescence spectrum is attributed to the existence of states introduced by Cu doping. The X-ray diffraction measurements revealed that the nanoparticles are grown in zinc blende crystal structure phase and the doping has not altered the crystal structure of the nanoparticles. Furthermore, we have performed the conductivity measurements of ZnS nanoparticles using four probe resistivity method, the Cu-doped ZnS nanoparticles exhibit higher conductivity as compared to the un-doped counter partners under the same conditions of UV irradiation. These observations are consistent with the red shift in the UV-visible and photoluminescence spectra, because doping with Cu decreases the band gap, which as a result helps to increase the photoconductivity of the nanoparticles under same UV irradiation.

Zinc sulfide (ZnS) has traditionally shown remarkable fundamental properties versatility and a promise for novel diverse applications, including light-emitting diodes (LEDs) [10], electroluminescence [11], flat panel displays [12], sensors [13], lasers [14], and bio-devices [15]. The photoluminescence mechanism of ZnS nanocrystals doped with other metal ions is very complex. Small particles have higher surface to volume ratio and hence have more accessible carriers for photoluminescence [16]. The ZnS is an important II-VI chalcogenide with potential applications in electronic and optoelectronics because of its wide direct band gap, 3.77 eV for the wurtzite structure [16] and 3.72 eV for the zinc blende structure [17]. ZnS has high resistance to photo-chemical degradation. It can absorb the fraction of the solar radiation which is carcinogenic in nature, and it is relatively of low cost and non-toxic. It can be crystallized into two allotropic forms, a cubic form with zinc-blende (ZB) crystal structure and a hexagonal form with wurtzite (WZ) crystal structure. The former is stable at low temperature, while the latter is the high temperature polymorph which can be formed at the temperature of around 1296 K [18]. However, the nano-structures of ZnS have not been investigated in much detail.

Over the past few years, considerable efforts have been placed on the synthesis of ZnS nanostructures. The reduced dimensions of nano-structured materials enable one to reduce the size of electronic circuitry. They are expected to have higher quantum efficiencies due to increased oscillator strengths as a result of quantum confinement effects. A threshold for the occurrence of quantum effects is given by the value of Bohr radius of exciton in the bulk material [14]. As a representative of wide band gap II-VI semiconductor nanocrystals, ZnS has been synthesized by different methods. ZnS has a band gap of 3.66 eV at the temperature of 300 K. This corresponds to ultraviolet (UV) radiation for optical inter-band transitions. It is an important inorganic binary semiconducting material for a variety of applications including photoconductors, solar cells, field effect transistors, sensors, transducers and optical coatings [15-18]. It has been gaining importance in research community because of its diverse applications.

In this work we report the synthesis and the results of optical and electrical measurements of ZnS nanoparticles. The synthesis and Cu-doping of ZnS have been achieved at low temperature at 60oC. The doping give a red shift in the photoluminescence (PL) spectrum, which indicates the existence of states below the band gap edge of the pure ZnS. This suggests that the doping can help to tune the band gap from near UV to visible region of the ZnS nano-structures and the implications of the band gap tuning have been discussed relevant to electrical and optical properties. By tuning the band gap a diversity in optical and electrical properties can be achieved and make these nano-structured materials suitable for many practical applications.

Zinc sulphide nanoparticles both un-doped and doped were synthesized by wet chemical or co-precipitation method. In this reaction we used deionized water as reaction medium. In a typical experiment 0.1M solutions of zinc acetate di-hydrate Zn(CH3COO)2.2H2O was prepared in deionized water at room temperature. An equimolar solution of sodium sulphide nona-hydrate Na2S.9H2O was prepared in the same reaction medium. Zinc acetate was allowed to dissolve completely in deionized water under vigorous magnetic stirring, until a clear homogeneous solution was formed. After this the solution was stirred for 30 minutes. Then equimolar solution of sodium sulphide was added drop-wise into the metal precursor solution. When sodium sulphide solution was added a milky mixture was formed indicating the formation of zinc sulphide nanoparticles. The resulting mixture was stirred for two hours. The white precipitates of zinc sulphide were collected by centrifugation and washed with distilled water and ethanol for three times. The washed precipitates were collected and dried at 80 oC. In order to dope the ZnS nanoparticles the metal precursor solution was stirred with 10 % (10 weight percent of Cu(CH3COO)2 corresponds to ~7.0 × 1022 atoms of Cu available for doping) copper acetate for one hour and then sodium sulphide solution was added drop wise until the precipitates were formed. The resulting precipitates were centrifuged and washed with distilled water and ethanol three times, and were dried in oven at 80oC.

The scanning electron microscope (SEM) images were obtained by using SEM (LEO 440i) attached to Energy Dispersive X-rays-system (EDX). The absorption spectra of these samples were collected by using UV-vis (Shimadzu 1601) spectrophotometer and the photoluminescence spectra of ZnS and Cu-doped ZnS nanoparticles were recorded with Fluorescence Spectrophotometer (Hitachi F-7000, 2133-007) by being excited at 275 nm. The X-ray diffraction (XRD) spectra of ZnS and Cu-doped nanostructures were collected by using the instrument (Orion The Netherlands, 3040/60, X’Pert Pro) equipped with copper Kα radiation source in the 2θ range of 10-60o. The Fourier transformed infra-red (FTIR) spectra of doped and un-doped ZnS nanoparticles were measured by Thermo Scientific Nicolet-6700 FT-IR spectrometer. The electrical properties of ZnS nanostructures were assessed by Keithley’s 2400 series general purpose source meter. To measure the resistivity, the powder samples of ZnS were converted to pellets by using hydraulic press by applying pressure of ca. 2 tons. The pellet of each sample was amounted on a glass slab and four wires were connected to the instrument, in order to measure the resistivity of the samples.

The morphologies of pure and Cu-doped ZnS nanoparticles were analyzed by SEM and are depicted in figure 1(a) and 1(b), respectively. From the SEM images of ZnS nanostructures it can be seen that both the un-doped and Cu-doped nanoparticle have been synthesized in spherical shapes, they are agglomerated and appeared in the form of nanocrystallites. Within the given resolution of SEM images, it indicates that the doping has not changed the morphology of the ZnS nanostructures, figure 1(a) and 1(b). 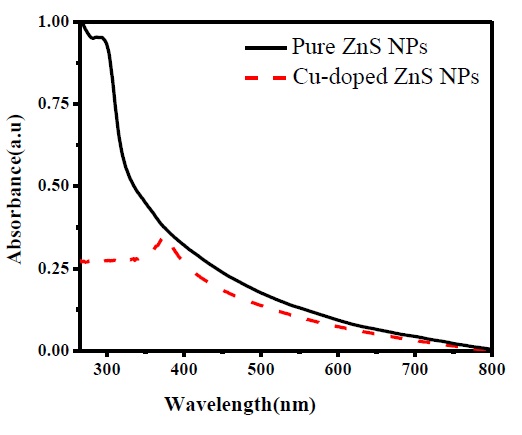 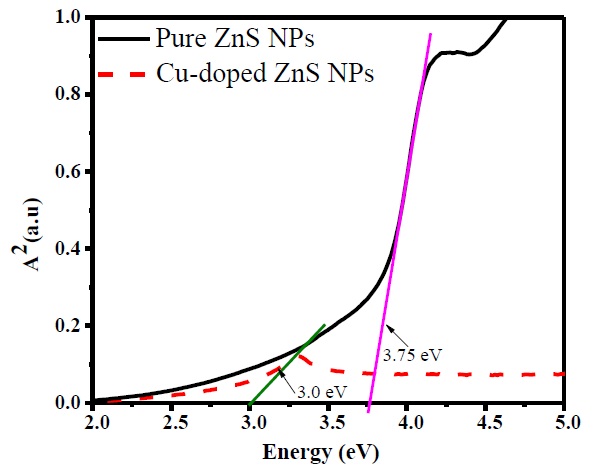 The room temperature PL is presented in figure 4. The PL spectrum shows a maximum at ca. 327 nm (3.79 eV) indicating the band edge emission followed by a red tail spreading approximately 500 nm. The origin of red tail can be attributed to zinc and sulphur vacancies and due to the sulphur bonds dangling at the interface of ZnS grains [19]. The observation of single emission peak followed by small peaks occurring at red region is also in consistent with the other reports [20-22]. 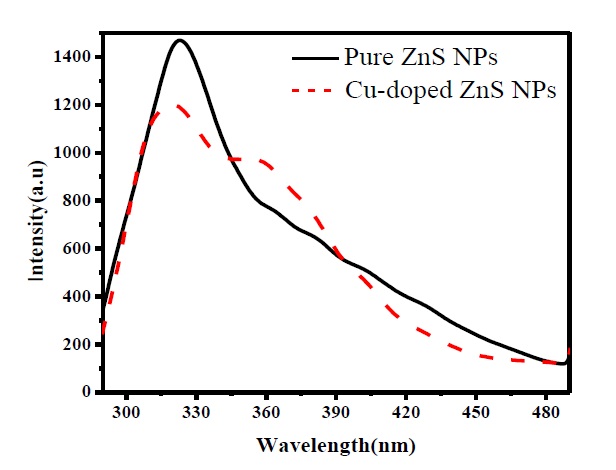 While, in the case of Cu-doped ZnS nanoparticles an additional feature is observed peaking at 360 nm (3.44 eV) The existence of additional feature can be attributed to the emission from trap states which are introduced by Cu doping. These trap states also quench the PL of un-doped ZnS nanoparticles as demonstrated by dashed line in figure 3. Following excitation at 275 nm the electron from the valence band is excited into the conduction band leaving a hole in the valence band. The PL process occurs when the photoexcited electron from the conduction band recombines with the hole in the valence band. The occurrence of additional peak with slight less intensity is due to defects, which are introduced by Cu+ ions doping. This emission peak might be due to the transitions form the conducting bands to the t2 levels of excited Cu2+ ions (d9) introduced by dopant [19,23,24].

In order to develop understanding regarding the crystal structure of the nano-structures, XRD analysis was performed for un-doped and Cu-doped ZnS nanoparticles, which were synthesized at room temperature. XRD analysis can give information about the crystalline or amorphous nature of the material. The sharp peaks show the crystalline nature of material and a broad hump appears when material gets amorphous, or the broadening of the peak also occurs when the nano-structures get agglomerated. The broadening of the peak may also appear due to the strains produced by dopant or it may be due to the deformation of crystal structure. The XRD measurements results have been presented in figure 5. 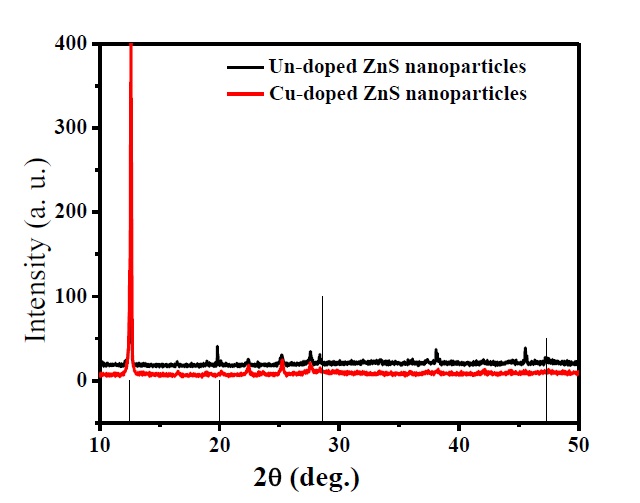 The XRD pattern revealed the cubic zinc blende crystal structure of ZnS nanoparticles. Three prominent peaks corresponding to the lattice planes (111), (220), and (311) are present confirming that ZnS nanomaterials are existing in zinc blende crystal structure. In the XRD pattern of copper doped ZnS, same three peaks at the same positions are observed. The peak intensities of un-doped and Cu-doped slightly differ and this difference is might be due to the non-uniformity of the samples. The XRD patterns also rule out the existence of any impurity, for instance CuO and Cu2S due to the presence of copper. The existence of ZnS nanoparticles in zinc blende crystal structure phase is also consistent with the previous report [25], in which the ZnS nanocrystals have been grown in specifically in wurtzite phase at low temperature, but due to very small differences in the zinc blende and wurtzite structure of ZnS the existence of ZnS in zinc blende phase could not be excluded. 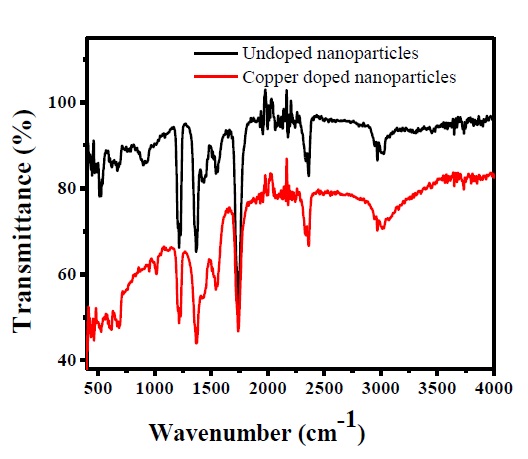 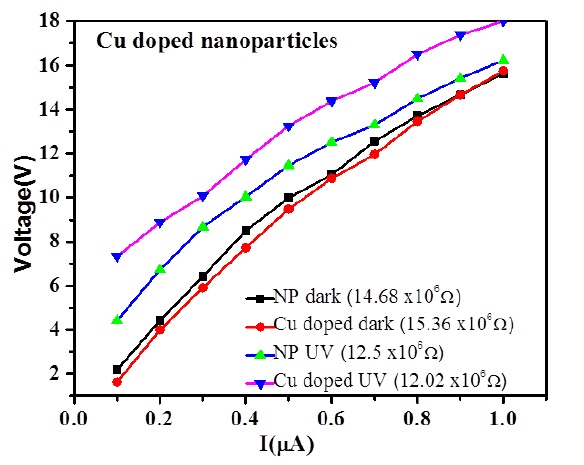 This work was performed within the Department of Chemistry Quaid-i-Azam University Islamabad and was supported by the Higher Education Commission (HEC) Pakistan by the equipment/research grants (PD-IPFP/HRD/HEC/2013/1983) and (20-3071/NRPU/R&D/HEC/13). The authors thank to Dr. Rana Iqtidar Shakoor for providing the SEM images.