The proposed article explains the versatility of Graphene oxide for a variety of applications. Graphene oxide synthesized by Hummer’s method has C:O ratio of 2.1 to 2.9. GO is used as a substitute for transparent conducting films such as ITO. GO finds a best impact in the field of nanomedicine for cancer treatment. Textile industry utilizes GO, in which the graphene fibers are intermixed with the fibres of textile resulting in the formation of sensors attached fabrics. GO is also a best material in food processing industry. The renewable energy fuel can be produced with the help of graphene oxide which can be incorporated in the photocatalyst for long lasting and stability.

Graphene oxide (GO) is an outstanding material obtained by processing graphite with strong oxidizers generally produced by modified Hummer’s method. The color of graphene oxide indicates the percentage of oxidation as the yellow color of the material indicates strong oxidation with the C:O ratio between 2.1 and 2.9 [1]. The presence of oxygen functionalities in graphene oxide makes it easily dispersible in water and other organic solvents which when further reduced can be utilized as a composite material in polymer matrixes for improving electrical and mechanical properties. Graphene oxide and reduced graphene oxide act as a template in anchoring nanoparticles in composite materials for application in various fields such as photovoltaics, supercapacitors and so on. Functionalized reduced graphene oxide (r-GO) utilized as a semiconductor material in Field Effect Transistors (FET) be employed as biosensors [2]. GO is used as an alternative for transparent electrodes such as ITO Substrates and also as a hole transporting layer in solar cells [3]. Combining 2-D GO, 1-D nanowires and 0-D nanoparticles results in efficient transparent conducting films. 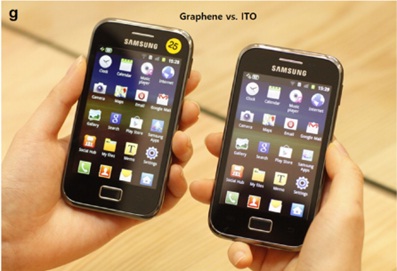 Metal nanoparticle r-GO is used as counter electrodes for quantum dot solar cells. In lithium ion batteries, high storage energy capacity has been achieved by nanocomposites of r-GO [4, 5]. Hollow polymer graphene oxide nanoparticles synthesized by pickering miniemulsion polymerization can be used in a variety of applications [6]. When GO is subjected to femtosecond pulsed laser exhibits multi-photon induced fluorescence mechanism. GO has a major role in analytical and bio-medical sciences which employ GO along with metal nanoparticles as an adsorption medium for DNA [7]. 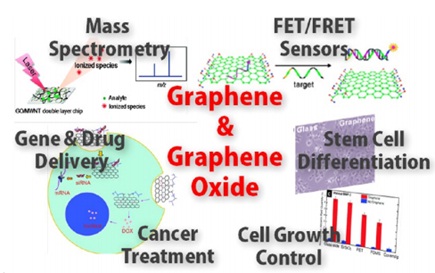 GO acts as a 2D surfactant in reactions where size controlled synthesis of nanocomposites takes place.

Stabilization of oxide nanoparticles can be achieved by anchoring the oxide nanoparticles in nitrogen doped graphenenano-scrolls [8, 9]. Graphene oxide can be used in textiles. It can be classified as medical textiles and technical textiles. In medical textile, Graphene yarn (spun from GO) used in smart textiles in clothing incorporate sensors and actuators which monitors the wearers environment to harmful chemicals and dangerous environmental situations. In technical textiles, GO is designed in such a way that the textile itself stores the electrical energy which can be used to create super capacitors having the capacitance of about 256 F/g. These yarns are produced by a wet spinning technique which creates long flexible yarns having porous, dense and robust structure. Applications of GO in textile industry includes self-cleaning textiles, anti-stain textiles, electro conducting textiles, UV blocking textiles and heat retaining textiles.

Pure GO is also used as food processing catalysts. It also can act as a food quality/safety analysis sensor. Functionalized GO nanoparticles (GO NPs) can be used in the delivery of antitumor drug for cancer cells [10, 11]. Doxorubicin, a potent anticancer drug can be loaded onto GO via ∏-∏ stacking. ∏-∏ stacking is also found in some polymers when combined with 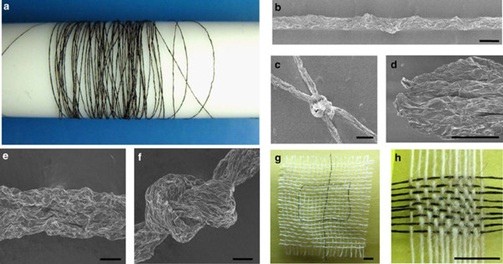 Lanphere et.al [12, 13] has studied stability and transport of GO NPs in surface water and ground water. This study gives us valuable suggestions regarding the application of catalyst loaded GO NPs which can remove pollutants and degrade harmful dyes while moving through the surface water and ground water. Similarly, the transport of sulfide-r-GO in saturated quartz sand performed by Xia et.al opened a new door in highlighting the significance of abiotic transformations on the fate and the transport of GO in aqueous systems [14]. These are the possible applications of GO based Nano composites. With these enormous applications of graphene oxide in various fields it can emerge as a giant Nanomaterial in near future.