Temperature has an effect on Dye sensitized solar cell (DSSC) performance. ZnO nanoparticles photo electrodes are prepared on FTO glass and at different temperatures in the range 300 °C and 400 °C. Electrical properties of the DSSCs using ZnO nanoparticles photoelectrodes at different temperatures are studied using I–V characteristic. The phenothiazine (PTZ) is used as a dye for this DSSC. This gives solar energy-to-electricity conversion efficiency (eta) of up to 5.5% when compared with Ru-complex (N3 dye) with an eta value of 6.2% under similar experimental conditions. The surface area and dye loading increased at temperature 300 °C. The electrical properties are found to be depends on the photo electrode temperature. Temperatures higher than 400 °C resulted in a decrease in current and power. The highest value of current is achieved at temperature of 400 °C when compare to 300 °C.

Photovoltaic technology or solar photovoltaic technology provides clean and renewable. A solar cell is an electrical device. The Electrical device converts the energy of light directly into electricity by the photovoltaic effect. It is a form of photoelectric cell. Photoelectric cell defined as a device whose electrical characteristics, such as resistance, current, voltage, or change when exposed to light. Solar cells are the solar panels, or known as the building blocks of photovoltaic modules. Solar photovoltaic energy can reduce the world’s dependency on fossil fuels. Dye sensitized solar cell (DSSC) is one of the best choice. Because of its low cost in fabrication and potential application for flexible devices and transparent devices. DSSC is a metal–oxide wide-band-gap solar cell [1]. It composed as a dye-modified wide band gap semiconductor photo electrode, an electrolyte containing a redox and a counter electrode.

ZnO-based DSSCs have been an alternative to TiO2 based DSSCs. ZnO nanostructures has shown the unique multifunctional properties with high excit on binding energy (60 meV), non-toxicity, high transparency, low resistivity in the visible range and high light trapping characteristics. External quantum efficiencies use for purely ZnO as the active material have generally been below 3% but with some DSSCs using liquid electrolytes it reports to be above 5.

ZnO DSSCs are still challenging and need to be studied further so that their solar photovoltaic properties can be improved using different types dyes and electrolyte. For example, suitable dye materials and electrolyte need to be developed for ZnO- based DSSCs, and the fabrication design and parameters of the nanostructure need to be optimized, which is essential for maximizing the energy conversion efficiency.

ZnO dye-sensitized solar cells (DSSCs) with different photo electrode nanostructures are studied [2]. For this we need to develop the main nanostructural forms of ZnO including nanoparticles, nanorods, nanotubes, nanobelts, nanosheets and nanotips.

The investigation done on an effect of the temperature of ZnO nanoparticle layers on the performance of DSSCs [3]. The annealing temperature’s influence on the charge transport property of ZnO-based DSSCs is studied through electrical measurements.

synthesis of zinc oxide nanoparticles by sol-gel method were obtained with 1.43g of ZnSO4 and 0.4g of NAOH taken in 20ml of water each. The solution is prepared after continuous mixing of the precursor drop by drop. Then taking 20ml of (CH)3 2NCH solution and to the above prepared precursor solution. By this procedure the gel is formed. The gel is taken and placed in hot sir oven for 24hours at 80 °C. The final product is formed and taken for analysis.

2 g of ZnO nanopowder was wetted with 0.2 g of polyethylene glycol (PEG 400). The paste was dispersed mechanically in mortar until a very soft uniform paste was obtained Figure 1. A 5 mL of ethanol was then added to the paste for the coating preparation to obtain a viscosity.

ZnO paste was deposited on fluorine-doped SnO2-(FTO)-coated glass substrates. The layers were dried at 300 °C for one hour, and then heating in air at temperature 400 °C Figure 2.

The dye sensitization was carried out by dipping the electrodes into a solution of 0.5 mM of a phenothiazine, and then dip in ethanol for a few hours [4]. 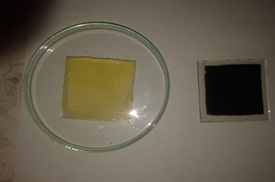 The semiconductor material, dye solution was placed in a petri-dish and the ZnO -coated FTO was immersed into dye solution for 2 hours for sensitize so that dye was absorbed inside ZnO active areas. Open air conditions the ZnO -coated FTO was then rinsed in distilled water and ethanol and dried. ZnO layer of 5 mm width from each FTO edge was scratched for electrical connection [5].

Hence the ZnO layer was 10 mm x 10 mm in each FTO surface. DSSC was assembled like a sandwich by placing the FTO side which had been coated by ZnO layer and sensitized as a dye face to face with another FTO side. The two pieces of FTO glass were clamped on the opposite sides using two metal clips. The electrolyte solution was dropped in the space between the two FTO glasses. The DSCC was then measured its circuit voltage (V) and current (C) by a digital multi meter.

To assemble the solar cells, the assembled cell was then clipped together Figure 3. 0.05 M iodine I2 (FluckaChemika), were injected into the open cell from the edges by capillarity. 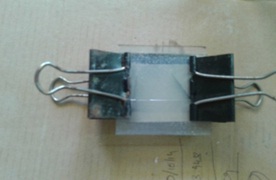 The XRD data of powder is synthesized at room temperature. The atomic level was a difficult task but, the discovery of electromagnetic radiation with 1 Å (10-10 m) wavelength, appeared at the region between gamma-rays and ultraviolet, and makes it possible. Because the atomic distance in matter is comparable with the wavelength of X-ray, the phenomenon of diffraction find its way through it, and gives many best results related to the crystalline structure Figure 4. The unit cell and lattices of ZnO which are distributed in a regular 3-dimensional way in space forms the base for diffraction pattern to occur. These parallel plane series of lattices will have its own specific d-spacing and different orientations [7]. The reflection of incident monochromatic X-ray from these Successive planes of crystal lattices when the difference between the planes is of complete number n of wavelengths leads to famous Bragg’s law: X-ray Diffraction in accordance with Bragg’s Law Nλ=2dsinƟ

Where n is an integer 1, 2, 3….. (Usually equal 1), λ is wavelength in angstroms (1.54 Å for copper), d is interatomic spacing in angstroms, and θ is the diffraction angle in degrees. Plotting the angular positions and intensities of the resultant diffracted peaks of radiation produces a pattern, which is a characteristic of the sample [8].

The unique characteristic X-ray diffraction pattern of each crystalline solid gives the designation of “fingerprint technique” to XRD for its identification. XRD is used for determining the ZnO structure, i.e. how the atoms are packed in a crystalline state and what is the interatomic distance, angle etc. Thus proved that the X-ray diffraction plays a vital role for the structural characterization in solid state physics and materials science.

The scanning electron microscope (SEM) will use a high-energy focus beam electrons to generate a variety of signals on the surface of solid specimens. Information like external morphology (texture), chemical composition, crystalline structure, and orientation of materials of the sample are revealed by the signals that are derived from electron. In most of the applications, data is collected over a selected area of the surface of the sample, and a 2-dimensional image is generated which displays spatial variations in these properties Figure 5. Using the most conventional SEM techniques (magnification from 20X to 30,000X approximately, spatial resolution of 50 to 100 nm), surface areas ranging from approximately 1 cm to 5 microns in width can be imaged in a scanning mode [9]. 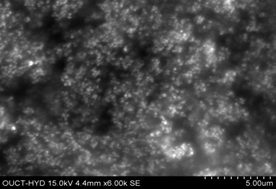 The SEM is capable of playacting analyses of selected purpose locations on the sample; this approach is especially useful in semi-qualitatively or quantitatively determining chemical compositions, crystalline structure, and crystal orientations. The function and design of the SEM is similar to the EPMA and considerable overlap in capabilities exists between the two instruments.

Accelerated electrons in an SEM carry important amounts of kinetic energy, and this energy is dissipated as a range of signals manufacturing by electron-sample Interactions once the incident electrons are decelerated within the solid sample [10].

These signals include secondary electrons, backscattered electrons (BSE), diffracting backscattered electrons, photons, visible light, and heat. Secondary electrons and backscattered electrons are commonly used for imaging samples: secondary electrons are most useful for showing morphology and topography on samples and backscattered electrons are most beneficial for illustrating contrasts in composition in multiphase samples (i.e. for rapid phase discrimination SEM analysis is considered to be "non-destructive"; that's, x-rays generated by electron interactions do not result in volume loss of the sample, thus it's possible to investigate a similar materials repeatedly. The SEM is habitually used to generate high-resolution pictures of shapes of objects (SEI) and to indicate spatial variations in chemical compositions: 1) acquiring elemental maps or spot chemical analyses using EDS, 2) discrimination of phases based on mean atomic number (commonly associated with relative density) using BSE, and 3) compositional maps based on differences in trace element "activitors" (typically transition metal and rare earth elements) using CL (86). The SEM is additionally wide used to identify phases based on qualitative chemical analysis and/or crystalline structure. Precise measurement of very small features and objects down to 50 nm in size is also accomplished using the SEM.

The wavelength of the visible radiation is longer than that of the ultraviolet radiation. It ranges from 100 to 400 nm. In a standard UV-V is spectroscopy, a beam of light is split; one half of the beam (the sample beam) is directed through a transparent cell containing an answer of the compound being analyzed, and (one half) the reference beam is directed through the same cell that doesn't contain the compound however contains the solvent. The instrument is designing so that it will make a comparison of the intensities of the 2 beams as it scans over the desired region of the wavelengths. If the compound absorbs light at a specific wavelength, the intensity of the sample beam (IS) are less than that of the reference beam. Absorption of radiation by a sample is measured at various wavelengths and plotted by a recorder to give the spectrum that could be a plot of the wavelength of the whole region versus the absorption (A) of light at each wavelength. And the band gap of the sample will be obtained by plotting the graph between (αhν vs hν) and extrapolating it along x-axis. Ultraviolet and visible spectrometry is almost entirely used for quantitative analysis; that's, the estimation of the amount of a compound best-known to be present within the sample. The sample is usually examined in resolution figure 6. 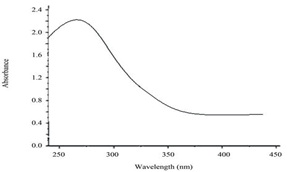 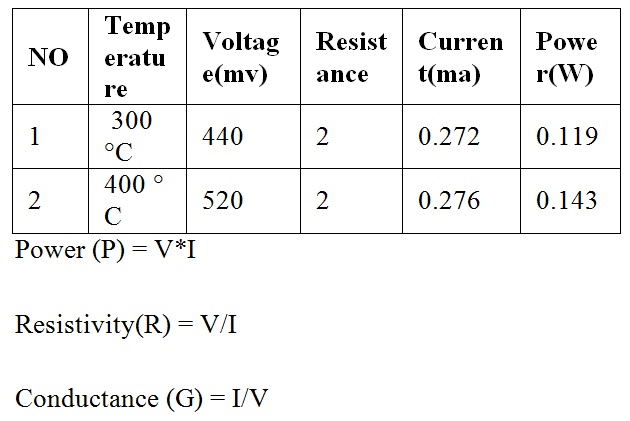 The authors are grateful to thank Dr. P. Narasimha Reddy (Director) and Dr. T. Ch. Siva Reddy (Head-Mechanical Engineering) of Sreenidhi Institute of Science and Technology, Hyderabad, India. The author would like to thank Mr.B.Mahasenadhipathi Rao (Asst.Professor) for the support and encouragement all the way long.