A theoretical approach was employed on analogue of ciprofloxacin as potent anti-prostate cancer to investigate the bioactivity of the compounds by utilizing Quantitative Structure-Activity Relationship (QSAR) techniques. Genetic Function Algorithm (GFA) and Multiple Linear Regression Analysis (MLRA) were used to select the descriptors and to generate the correlation QSAR models that relate the activity values against prostate cancer with the molecular structures of the active molecules. The models were validated and the best model selected has squared correlation coefficient (R2) of 0.990531, adjusted squared correlation coefficient (Radj) of 0.95962 and Leave one out (LOO) cross validation coefficient (Q_cv^2) value of 0.942963. The external validation set used for confirming the predictive power of the model has its R2pred of 0.8486. Stability and robustness of the model obtained by the validation test indicate that the model can be used to design and synthesis other ciprofloxacin derivatives with improved anti-prostate cancer activity.

Prostate cancer develops when abnormal cells in the prostate gland start to grow more rapidly than normal cells, and in an uncontrolled way. Prostate Cancer has become the number one cancer in men with increasing incidence and morbidity in African men [1]. It diagnosed primarily in older men, with a majority being over age 65, although men in their 30s and 40s have been diagnosed with the disease. Its incidence and prevalence in black men is in multiples of those from other races in several studies [2]. The reason for this is not yet clear and an explanation for the disparity may lie in studies involving black men from different populations to see if there is an enhancing factor associated with the racial origins of these men.

Ciprofloxacin (CP), an antibiotic has been shown to have anti-proliferative and apoptotic activities in several cancer cell lines. Moreover, several reports have highlighted the interest of increasing the lipophilicity to improve the antitumor efficacy.

Synthesis of novel compounds are developed using a trial and error approach, which is time consuming and expensive. The application of Quantitative Structure Activity Relationship (QSAR) technique to this problem has potential to minimize effort and time required to discover new compounds or to improve current ones in terms of their efficiency. QSAR establishes the mathematical relationship between physical, chemical, biological or environmental activities of interest and measurable or computable parameters such as physicochemical, topological, stereo chemical or electronic indices called molecular descriptors [3]. The aim of this research was to develop various QSAR models for predicting the activity of ciprofloxacin derivatives against prostate cancer.

Data set of ciprofloxacin derivatives as potential anti-prostate cancer that were used in this study were obtained from the literature [4].

M) were converted to logarithm unit (pIC50) using the equation (1) below in order to increase the linearity activities values and approach normal distribution. The observed structures and the biological activities of these compounds were presented in Figure 1 and Table 1.

The 2D structures of the compounds presented in the Table 1 were drawn utilizing chemdraw programming [5,6] . The spatial conformations of the compounds were exported from 2D structure to 3D format using the Spartan 14 V1.1.4 Wave Function programming package. All 3D structures were geometrically optimized by minimizing energy. The chemical structures were initially minimized by Molecular Mechanics Force Field (MMFF) count to remove strain energy before subjecting it to quantum chemical estimations. Density Functional Theory (DFT) method was later employed by utilizing the Becke’s three parameter exchange functional (B3) hybrid with Lee, Yang and Parr correlation functional (LYP) which is termed (B3LYP) hybrid functional for complete geometric optimization of the structures. The Spartan files of all the optimized molecules were then saved in SD file format, which is the recommended input format in PaDEL-Descriptor software V2.20 [5].

The descriptors’ value was normalized using Equation 2 in order to give each variable the same opportunity at the onset to influence the model [7].

Where Xi is the value of each descriptor for a given molecule, Xmax and Xmin are the maximum and minimum value for each column of descriptors X. The normalized data were subjected to pretreatment using Data Pretreatment software obtained from Drug Theoretical and Cheminformatics Laboratory (DTC Lab) in order to remove noise and redundant data [5].

In order to obtain validated QSAR models the dataset was divided into training and test sets using Data Division software obtained from Drug Theoretical and Cheminformatics Laboratory (DTC Lab) by employing Kennard and Stone’s algorithm . This algorithm has been applied with great success in many recent QSAR studies and has been highlighted as one of the best ways to build training and test sets [5, 8, 9, 10, 11, 12]. In this algorithm, two compounds with the largest Euclidean distance apart were initially selected for the training set. The remaining compounds for the training set were selected by maximizing the minimum distance between these two compounds and the rest of the compounds in the dataset. This process continues until the desired number of compounds needed for the training set have been selected then, the remaining compounds in the dataset would be used as the test set.

The algorithm employs Euclidean distance EDX (p, q), between the x vectors of each pair (p, q) of samples to ensure a uniform distribution of such a subset along the x data space N is the number variables in x, and M is the number of samples while xp (j) and xq (j) are the jth variable for samples p and q respectively.

The training set was used to generate the model, while the test set were used for the external validation of the model.

SEE is the Standard Error of Estimation which is equivalent to the models standard deviation.  It’s a measure of model quality and a model is said to be a better model if it has low SEE value. SEE is defined by equation below;

The square of the correlation coefficient (R2) describes the fraction of the total variation attributed to the model. The closer the value of R2 is to 1.0, the better the regression equation explains the Y variable. R2 is the most commonly used internal validation indicator and is expressed as follows:

R2 value varies directly with the increase in number of repressors i.e. descriptors, thus, R2 cannot be a useful measure for the stability of model. Therefore, R2 is adjusted for the number of explanatory variables in the model. The adjusted R2 is defined as:

Where p = number of independent variables in the model.

The capability of the QSAR equation to predict bioactivity of new compounds was determined using the leave-one-out cross validation method. The cross-validation regression coefficient

was calculated with the equation below:

The coefficient of determination for the test set

was calculated with the equation below;

are the predicted and experimental activity test set. While

​ is mean values of experimental activity of the training set.

To guarantee the created QSAR model is strong and not inferred by chance, the Y-randomization test was performed on the training set data as suggested by [13]. Random MLR models are generated by randomly shuffling the dependent variable (activity data) while keeping the independent variables (descriptors) unaltered. The new QSAR models are expected to have significantly low R2 and Q2 values for several trials, which confirm that the developed QSAR models are robust. Another parameter,

​ is also calculated which should be more than 0.5 for passing this test.

Quality Assurance of the Model

The fitting ability, stability, reliability and predictive ability of the developed models were evaluated by internal and external validation parameters. The validation parameters were compared with the minimum recommended value for a generally acceptable QSAR model [14] showed in Table 2.

A QSAR examination was performed to investigate the structure activity relationship of 20 compounds as potent anti-prostate cancer. The nature of models in a QSAR study is expressed by its fitting and forecast capacity. In order to assemble a decent QSAR model for anti-prostate cancer with good predictive power for the selected test set. Kennard-Stone algorithm was used to divide the dataset of  20 compounds into a training set of 14 compounds which was used to developed the model and a test set of 6 compounds which was applied to assess the predictive ability built model.

The Genetic Algorithm- Multi Linear Regression (GA–MLR) investigation led to the selection of three descriptors which were used to assemble a linear model for calculating predictive activity on prostate cancer. Four QSAR models were built using Genetic Function Algorithm (GFA), but due to the statistical significance, model 1 was selected, reported and its parameters were as well calculated.

Where superscript a represent the test set

Y- Randomization parameter test were reported in Table 6. The low R2 and Q2 values for several trials confirm that the developed QSAR model is robust. While the cR2p value greater than 0.5 affirms that the created model is powerful and not inferred by chance.

Plot of predicted activity against experimental activity of training and test set were shown in Figure 2 and Figure 3 respectively. The R2 value of 0.9905 for training  set  and R2 value of 0.8486 for test set recorded in this study was in agreement with GFA derived R2 value reported in Table 2. This confirms the reliability of the model. Plot of Standardized residual versus experimental activity shown in Figure 4 indicates that there was no systemic error in model development as the spread of residuals was pragmatic on both sides of zero [15].

Table 4: List of some descriptors used in the QSAR optimization model 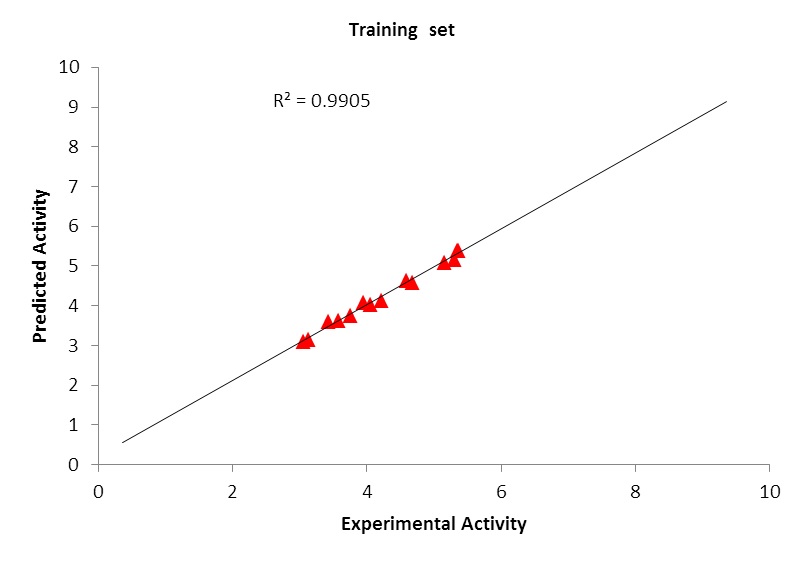 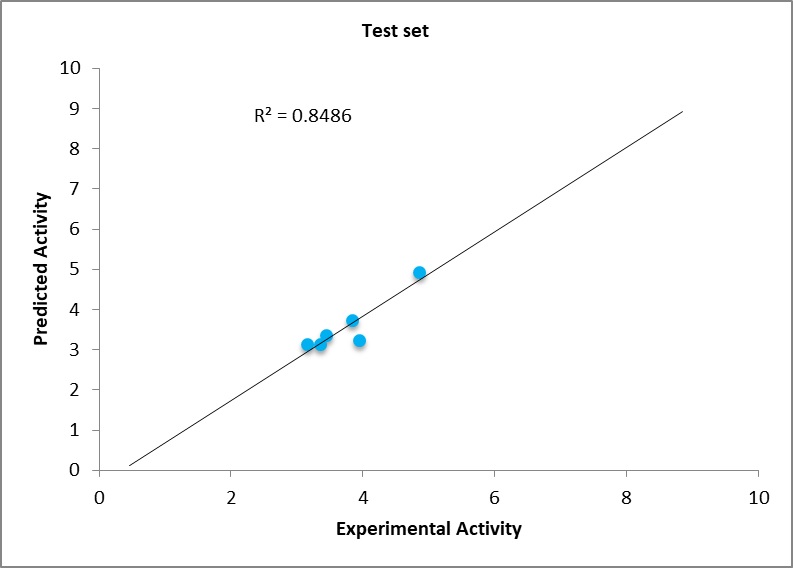 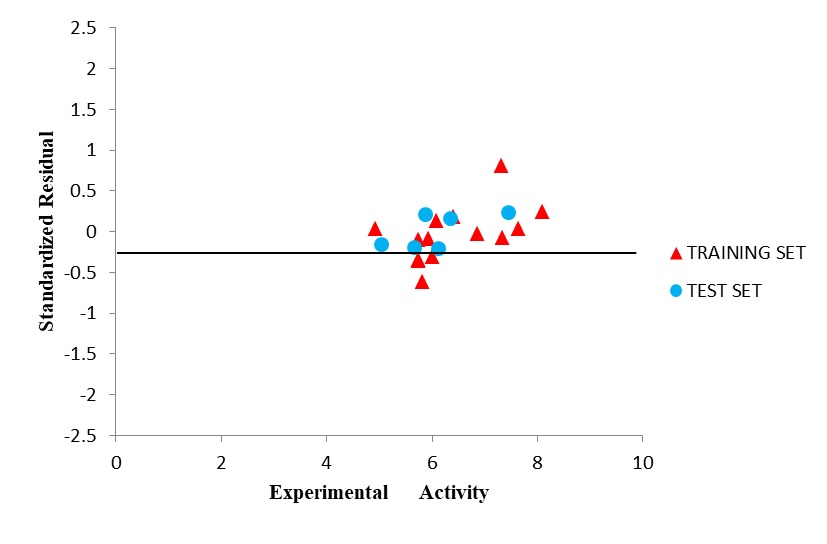 This work addresses the Quantitative structure activity relationship (QSAR) between ciprofloxacin derivatives and their (pIC50) against prostate cancer. Results from the optimal model showed that the pIC50 of the studied molecules against prostate cancer was affected by (AATSC6m, MDEC-22 and L3v) descriptors. The robustness and applicability of QSAR equation has been established by internal and external validation techniques. Stability and robustness of the model obtained by the validation test indicate that the model can be used to design other ciprofloxacin derivatives with improved anti-prostate cancer activity.