Light-chain amyloidosis is a rare clinical disorder predominantly affecting the elderly population. The accumulation of amyloid deposits in normal tissue is characteristic for this disease which usually manifest with a spectrum of clinical presentations resulting in organ dysfunction or failure. Diagnosing light chain amyloidosis poses a huge challenge in daily clinical practice and if untreated just about a fifth of patients will survive up-to 2 years following diagnosis.

We report a case of light chain amyloidosis misdiagnosed and treated as extrapulmonary tuberculosis in a 50-year-old woman of African descent who presented with a 3-year history of large recurrent pleural effusions. Over the period of 3-years, the patient has been empirically prescribed anti-tuberculous medications twice and completed a 6-month course in both occasion. The patient has undergone several procedures for symptomatic relief including; thoracentesis, pericardiocentesis and pleurodesis with bleomycin. Throughout, the patient has had some minimal symptomatic relief but never symptom-free. Furthermore, she has noted that her symptomatic relief period post thoracentesis has been progressively shortening as time goes by. Her past medical history is significant for asthma and hypertension. Pleural biopsy stained with Congo red was diagnostic for light chain amyloidosis. Urine protein immunotyping showed no free light chains, however, renal biopsy stained with Congo red demonstrated amyloid deposits with an apple-green birefringence.

Light chain amyloidosis is a rare and fatal condition but treatable if diagnosed early and managed timely and aggressively. Furthermore, clinicians should raise an index of suspicion for light chain amyloidosis when confronted by an elderly with large recurrent pleural effusions not explained by other common disorders.

Light-chain (AL) amyloidosis is a multisystem clinical disorder characterized by a progressive accumulation of insoluble monoclonal immunoglobulin light chains in normal tissues [1]. The accumulation of amyloid deposits results in a spectrum of clinical presentations varying from structural dysfunction to organ failure. AL amyloidosis is rare with a reported incidence of 9 cases/million inhabitants/year and over 90% of patients are aged 50 years and above [2].

AL amyloidosis is often misdiagnosed for other conditions due to its wide range of manifestations coupled by non-specific symptoms. Depending on the affected organ(s), patients with AL amyloidosis may present with macroglossia, carpal tunnel syndrome, nephrotic syndrome, hepatomegaly, splenomegaly, congestive heart failure, atypical multiple myeloma, and autonomic or sensory neuropathy. A demonstration of amyloid deposits with apple-green birefringence when a tissue biopsy is stained with Congo red is diagnostic [3], however, a case presenting with a negative Congo red staining has been documented [4]. Under ideal conditions, after a tissue diagnosis is established, confirmation of AL amyloidosis entails demonstration of a plasma cell dyscrasia by a bone marrow biopsy or by the presence of a monoclonal light chain in the serum or urine [5].

If untreated, the 2-year survival rate of patients with AL amyloidosis is 20% and despite the present availability of effective regimens, nearly a third of deaths occur within few weeks of diagnosis due to a late diagnosis [6, 7]. The management of AL is directed toward the affected organ(s) and several drugs including immunosuppressants, immunomodulators, antineoplastic and uricosuric agents are utilized. Furthermore, stem cell transplantation has shown promising results with a 60% 5-year survival rate [8, 9]. We report a case of AL amyloidosis misdiagnosed and treated as extrapulmonary tuberculosis in a 50-year-old woman of African descent who presented with a 3-year history of large refractory pleural effusions.

A 50-year-old female of African descent was referred to our institution with a 3-year history of recurrent pleural effusions. She is a known asthmatic since childhood and was diagnosed to have systemic hypertension for the past 13 years. She has been admitted about 8 times in the past 3 years due to recurrent episodes of shortness of breath. Her previous medical reports shows a good control of hypertension and her echocardiogram report performed 6-months prior revealed a mild left ventricular hypertrophy (LVH) with preserved systolic functions (EF 54%).

Her chief complaint of shortness of breath was of gradual onset and worsened with time. It was associated with exertion, chest tightness, left-sided chest pain, easy fatigability, orthopnea, and paroxysmal nocturnal dyspnea. Shortness of breath and its associated symptoms were relieved by resting and thoracentesis. The patient denies history of constitutional symptoms of tuberculosis (TB) or history of open TB contact. There was no history suggestive of thyroid disease, peripheral neuropathy or occupational lung hazard. She has neither smoked cigarettes nor lived with a smoker in her lifetime. Over the period of 3-years, the patient has been empirically prescribed anti-TB medications twice and completed a 6-month course in both occasion. The patient has undergone several procedures for symptomatic relief including; thoracentesis, pericardiocentesis and pleurodesis with bleomycin. Throughout, the patient has had some minimal symptomatic relief but never symptom-free. Furthermore, she has noted that her symptomatic relief period post thoracentesis has been progressively shortening as time goes by.

On examination she was alert and oriented. Her blood pressure was 119/73 mmHg, pulse rate 89 beats/minute, respiratory rate 19 breaths/minute, temperature 37.1oC, random blood glucose 9.6 mmol/L and she had a body mass index of 33 kg/m2. There was no exophthalmos, macroglossia or palpable lymph nodes. On respiratory examination, there was a diminished chest expansion, stony dull percussion note and reduced breath sounds on the left inframammary area with a right-sided tracheal deviation. The apex beat was felt on the 6th intercostal space lateral to the midclavicular line, otherwise the remainder of the cardiovascular examination was normal. Abdominal examination revealed ascites and non-tender hepatomegaly (liver span 18 cm). Other systems were essentially normal. 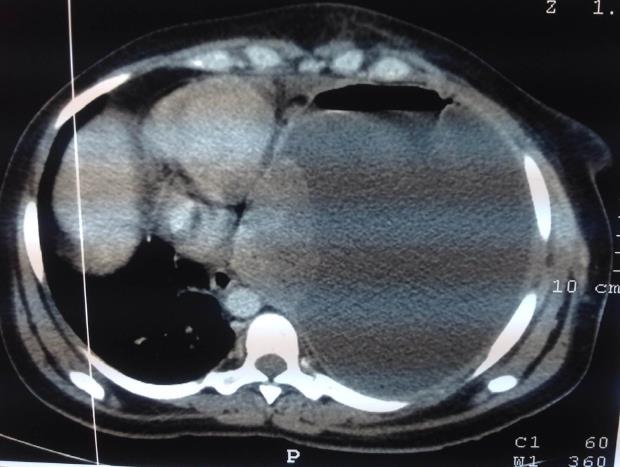 An echocardiogram revealed a mild pericardial effusion and mild LVH but normal ejection fraction (68%). The 24-hour urine revealed 3.45 g/24hr of protein with a normal creatinine (8.0 mmol/24hr) concentration. Potassium, sodium, and chloride serum concentrations were within normal values, however she had hypocalcemia (0.72 mmol/L) and hypoalbuminemia (14 g/L). Full blood count displayed a normal picture. She tested negative for HIV 1 and 2, and GeneXpert ruled out TB. Her lung function tests were conclusive for a moderate airway obstruction with good reversibility (FVC 43%, FEV1 33%, FEV1/FVC 64.32% [pre value], FEV1/FVC 73.5% [post bronchodilator]). The patient was referred to India for further investigations and management after 8 weeks of hospitalization and undetermined diagnosis. In India she underwent a series of investigations including blood tests, imaging and cancer screening, all of which were not diagnostic. Pleural biopsy stained with Congo red was diagnostic for AL amyloidosis. Urine protein immunotyping showed no free light chains, however, renal biopsy stained with Congo red demonstrated amyloid deposits with an apple-green birefringence. Multiple myeloma panel by fluorescent in-situ hybridization was negative and bone marrow biopsy findings were in keeping with a diagnosis of monoclonal gammopathy of undetermined significance (MGUS).

AL amyloidosis is likely to be under-, late- or mis-diagnosed even by an experienced clinician largely due to its non-specific and often vague symptomatology. Most often by the time the diagnosis is reached, most patients have advanced organ dysfunction and the prognosis is inevitably poor. Macroglossia is considered a pathognomonic sign of AL amyloidosis but absent in 85% of patients, our case inclusive [10]. Moreover, several other conditions may cause macroglossia and ought to be ruled out before attributing it to AL amyloidosis. Renal involvement is seen in 75% of individuals, cardiovascular and hepatic involvement in 50%, multiple myeloma in 33%, carpal tunnel syndrome in 25% and splenomegaly in 10% of patients [11].

Large, recurrent pleural effusions are a rare manifestation of AL amyloidosis which makes the diagnosis of this challenging to diagnose condition even tougher [12]. In the case we presented, the patient presented with large recurrent left-sided pleural effusions for about 3-years which was misdiagnosed and treated as extrapulmonary tuberculosis not once but twice. The patient had several admissions and caught attention of several specialties including nephrologist, cardiologist, hematologists and pulmonologist implying that AL management requires a multidisciplinary involvement. Due to local unavailability of facilities to diagnose amyloidosis, the patient was referred to India where the diagnosis of AL amyloidosis was finally reached. This pattern of unavailability of certain diagnostic facilities is common in most developing countries necessitating an overseas referral a process which takes time and ultimately lengthens the diagnosis process. Furthermore, arguably a very small proportion of patients in resource-limited settings can afford medical treatment abroad and as a result majority die even before the diagnosis is established.

The median survival of patients with AL amyloidosis is around 13 months without treatment [13, 14]. Chemotherapy has a potential to arrest amyloid deposition and facilitate its resorption leading to eradication of monoclonal B-cell population which may in turn restore organ function [13]. Furthermore, chemotherapy improves the quality of life and may extend the median survival to 17 months [14]. Unfortunately, majority of patients are diagnosed late and by then are usually unstable for intensive chemotherapy [15]. In the case presented, the diagnosis was disclosed in its advanced stage and she passed away within 8 weeks after the diagnosis while on treatment (bortezomib and dexamethasone) and awaiting a thoracoscopic decortication.

In conclusion, AL amyloidosis is a rare and fatal condition but treatable if diagnosed early and managed timely and aggressively. Furthermore, clinicians should raise an index of suspicion for AL amyloidosis when confronted by an elderly with large recurrent pleural effusions not explained by other common disorders.

Written informed consent was obtained from the patient’s next of kin for publication of this case report and any accompanying images.

The authors are thankful to the staff of the Jakaya Kikwete Cardiac Institute.

PP and PN took the history and performed physical examination. FL interpreted the CT angiograms. PP wrote the initial draft of the manuscript. All authors reviewed and contributed to the final version of this case report.

The authors declare that they have no competing interests