Multiple myeloma is one of the chronic lymph proliferative disorders that mainly affect elderly population. Despite the fact that various lines of treatment have been suggested and approved for this type of hematologic malignancy and autologous stem cell transplantation has also been applied for eligible patients, the optimal combination and sequence of therapy is yet to be determined in majority of patients. One of the main reasons for this treatment dilemma is the incurable nature of the disease. Moreover, the malignant cells, show distinct clonal features with a variable response to these suggested therapeutic approach and further genetic changes may happen once the disease has been progressed hence, the treatment may be extremely difficult in the relapsed cases. This review mainly focuses on the available immunotherapy in multiple myeloma and ongoing clinical trials for immunotherapy in multiple myeloma.

Multiple myeloma is a hematologic malignancy that develops in the bone marrow [1].  On a worldwide scale, it is estimated that about 86,000 incidence cases occur annually, accounting for about 0.8% of all new cancer cases. About 63,000 subjects are reported to die from the disease each year, accounting for 0.9% of all the cancer deaths. Geographically, the frequency is very unevenly distributed in the world with the highest incidence in the industrialized regions of Australia/New Zealand, Europe and North America. Incidence and mortality seems to be stable in Asian countries and increases slowly over the decades among whites in the western countries [2]. African– Americans and black people have higher incidence rate than people of other races [3]. Western countries have higher incidence rate as compared to Asian countries [4]. According to the data in 2011, it was estimated that the prevalence of this type of cancer was about 83,367. Incidences (6.1 per 100,000) of this type of cancer were higher than death (3.4 per 100,000) in both men and women [3]. Multiple myeloma is the 14th leading cause of cancer death [4, 5].

Multiple myeloma has age-standardized incidence rate of 1.4% and mortality rate of 1.9%.There is an annual increase in the incidence of multiple myeloma by about 0.7% and annual death rate has been falling by about 1.3%. Five year survival rate for this type of cancer was found to be 44.9% [3]. There is predominance of male over female, with higher incidence observed in between the age of 65–74 and higher death rate observed in between the age of 75–84 [3].  Individuals having history of monoclonal gammopathy of undetermined significance (MGUS) possess an annual 1% risk of multiple myeloma development [3].

While various factors have been implicated, including environmental, genetic, and infectious, the exact etiology remains unknown [6].

Thalidomide in combination with Dexamethasone is approved for the treatment of patients with newly diagnosed multiple myeloma. Thalidomide treatment of multiple myeloma patients is accompanied by an increase in the number of circulating natural killer (NK) cells and an increase in plasma levels of interleukin-2 and interferon-gamma (T cell-derived cytokines associated with cytotoxic activity). The cellular processes of angiogenesis inhibited by thalidomide may include the proliferation of endothelial cells. The maximum plasma concentrations reached approximately 2–5 hours after administration. The mean elimination half-life of thalidomide in plasma following single oral doses between 50 mg and 400 mg was 5.5 to 7.3 hours [7].

This drug is contraindicated in pregnancy and hypersensitivity to the drug or its components. If thalidomide is taken during pregnancy, it can cause severe birth defects or embryo-fetal death.  The use of thalidomide in multiple myeloma results in an increased risk of venous thromboembolism, such as deep venous thrombosis and pulmonary embolism. The most common adverse reactions are fatigue, hypocalcaemia, edema, constipation, neuropathy-sensory, dyspnea, muscle weakness, leukopenia, neutropenia, rash/desquamation, confusion, anorexia, nausea, anxiety/agitation, asthenia, tremor, fever, weight loss, thrombosis/embolism, neuropathy-motor, weight gain, dizziness, and dry skin [7].

It is a thalidomide analogue, indicated for the treatment of patients with multiple myeloma, in combination with dexamethasone, in patients who have already taken one prior therapy. Lenalidomide is involved in the activation of T cells and NK cells, increased numbers of Natural Killer T (NKT) cells and inhibition of pro-inflammatory cytokines (e.g., TNF-α and IL-6) by monocytes. In multiple myeloma cells, the combination of lenalidomide and dexamethasone synergizes the inhibition of cell proliferation and the induction of apoptosis. It binds with plasma proteins to approximately 30%. Two identified metabolites of Lenalidomide are hydroxy-lenalidomide and N-acetyl-lenalidomide. The mean half-life of lenalidomide was three hours in healthy subjects and three to five hours in patients with multiple myeloma.

It is indicated for the treatment of patients with multiple myeloma who have received at least two prior therapies, including lenalidomide and bortezomib and have demonstrated disease progression on or within 60 days of completion of the last therapy. Possible mechanism is the enhancement of T cell- and NK cell-mediated immunity and inhibition of pro-inflammatory cytokines production, (e.g., TNF-αand IL-6) by monocytes. Pomalidomide is eliminated with a median plasma half-life of approximately 9.5 hours in healthy subjects. In multiple myeloma patients, t1/2 was approximately 7.5 hours.

Pomalidomide is contraindicated in pregnancy because it is a thalidomide (human teratogen) analogue. There may be Deep Venous Thrombosis (DVT) and Pulmonary Embolism (PE) in patient taking this drug. Most common adverse reactions are fatigue and asthenia, neutropenia, anemia, constipation, nausea, diarrhea, dyspnea, upper respiratory tract infections, back pain, and pyrexia [9].

Bortezomib: Bortezomib is a proteasome inhibitor indicated for the treatment of patients with multiple myeloma, either in first line or in progression after prior treatment. Bortezomib can reversibly inhibit chymotrypsin-like activity of the 26S proteasome in mammalian cells. The 26S proteasome degrades ubiquitinated proteins and maintain homeostasis within cells. Bortezomib inhibited 26S, leads to disruption of normal homeostatic mechanisms, and can cause cell death. Specifically, the agent inhibits nuclear factor (NF)-kappaB, a protein that is constitutively activated in some cancers, thereby interfering with NF-kappaB-mediated cell survival, tumor growth and angiogenesis. In vivo, bortezomib delays tumor growth and enhances the cytotoxic effects of radiation and chemotherapy

Carfilzomib: An epoxomicin derivate with potential antineoplastic activity. Carfilzomib irreversibly binds to and inhibits the chymotrypsin-like activity of the 20S proteasome, an enzyme responsible for degrading a large variety of cellular proteins. Inhibition of proteasome-mediated proteolysis results in an accumulation of polyubiquinated proteins, which may lead to cell cycle arrest, induction of apoptosis and inhibition of tumor growth [14].

Carfilzomib is indicated for the treatment of patients with multiple myeloma who have received at least two prior therapies, including treatment with Bortezomib and an immunomodulatory therapy. Carfilzomib irreversibly binds to and inhibits the chymotrypsin-like activity of the 20S proteasome, an enzyme responsible for degrading a large variety of cellular proteins. Inhibition of proteasome-mediated proteolysis results in an accumulation of polyubiquinated proteins, which may lead to cell cycle arrest, induction of apoptosis and inhibition of tumor growth.

Few other Proteasome inhibitors that are under clinical trial phase I-III are listed in table 1 below:

There is no MAB that is approved for multiple myeloma. Few drugs that are under clinical trial phase I-III as monotherapy are listed in table 2 below, 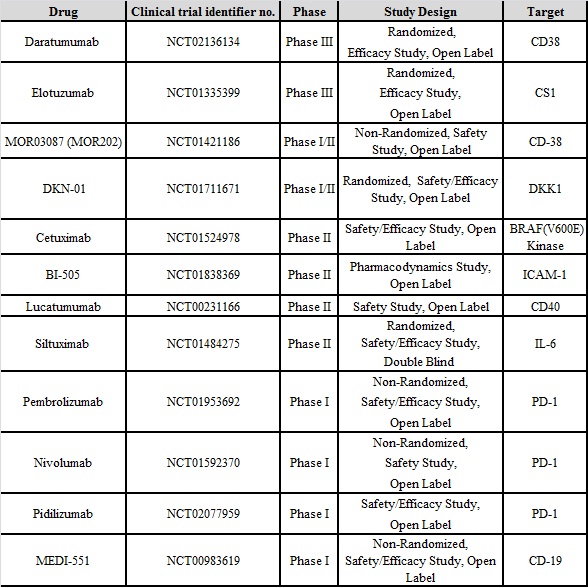 The transfusion of lymphocytes, referred to as adoptive T cell therapy, is being tested for the treatment of cancer and chronic infections. Adoptive T cell therapy has the potential to enhance antitumor immunity, augment vaccine efficacy, and limit graft-versus-host disease [15-26].

Few drugs that are under clinical trial phase I-III in this class are listed in table 3 below: 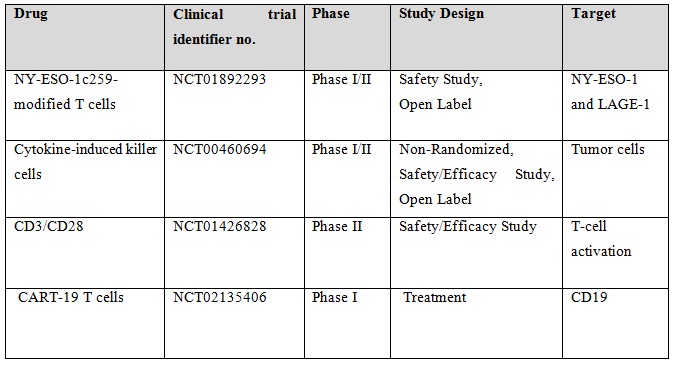 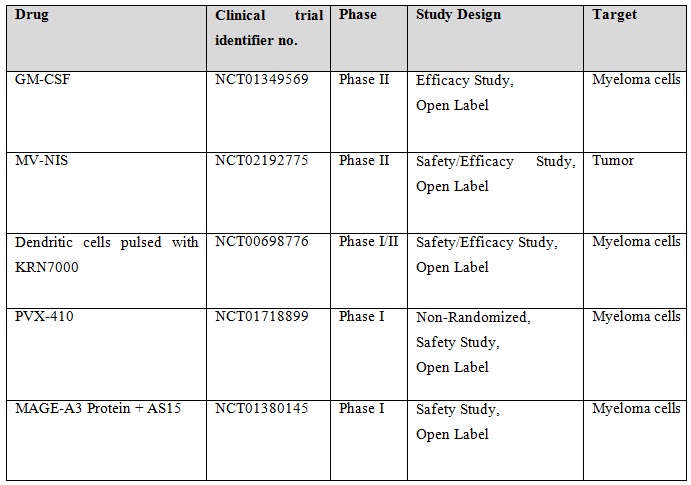 There are no drugs in this class that are approved for multiple myeloma. Few drugs that are under clinical trial Phase I-III are listed in table 5 below [31-35].

Hematopoietic stem cells are normally found in the bone marrow and in the peripheral blood (blood found in the arteries or veins). Stem cells are collected after approximately four cycles of initial (induction) myeloma therapy, in order to reduce the amount of myeloma cells. Medications that stimulate the production of stem cells (called mobilizing) are often used to obtain sufficient stem cells for several transplants [39].

There is no apoptotic agent that is approved for multiple myeloma. Only drug that is under clinical trial phase I-III is listed in table 6 below:

There is no MAPK inhibitor that is approved for multiple myeloma. Only drug that is under clinical trial phase I-III is listed in table 7 below [40].

There are no TKI inhibitors that are approved for multiple myeloma. Few drugs that are under clinical trial phase I-III is listed in table 8 below [41] 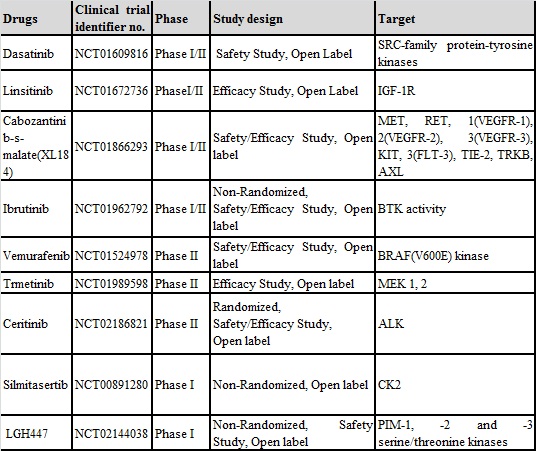 There are no PI3K Inhibitors that are currently FDA approved for multiple myeloma. The drug that is under clinical trial phase I-III is listed in table 9 below [42-50]

There are no mTOR Inhibitors that are currently FDA approved for multiple myeloma. The drug that is under clinical trial phase I-III is listed in table 10 below [51]

Multiple myeloma is a cancer of plasma cells in the bone marrow. Its incidences are found more in African–American and black people. Men are affected more by myeloma than women. It is the 14th leading cause of death. Immunotherapy has proven to be effective in the treatment of multiple myeloma. Various immunotherapeutic agents that are approved by FDA for multiple myeloma include Lenalidomide, Pomalidomide, Carfilzomib, and Bortezomib. Other drugs are under clinical trials. Our success in treating multiple myeloma is increasing and advancing with the knowledge of the function of the immune system. Researchers are still challenged in exploring innate and adaptive immune systems. Immunotherapy has been a promising development in the past few years. The recent activities have increased our understanding of the tumor microenvironment, various immunotherapeutic modalities or combination therapy (like chemotherapy with immunotherapy). Additionally, the effects of such modalities in combination with immunotherapy in cancer patients are still exploratory phase. The complete perspective of immunotherapy treatment has not been utilized. Proper preclinical and clinical designs are the important pillars in understanding the future of immunotherapy in treating cancer patients.