Uterine leiomyomas are highly common. Their incidence is generally cited as 20-25%, but has been shown to be as high as 70-80% in studies using histologic or sonographic examination. Distant metastasis is extremely rare and is of unknown etiology. It primarily affects women of reproductive age and might appear years after gynecological procedures such as myomectomy or hysterectomy. The most common theory of metastasis is though hematogenous spread. The most common sites are the lungs, heart, lymph nodes, omentum, peritoneum, pelvic cavity, breast, bone, mediastinum and nervous system. In our case the patient presented with abdominal pain with a history of a 9 cm leiomyoma which was removed 2 years prior via open myomectomy. On CT scan, a heterogenous uterus measuring 19x14x19cm was visualized along with multiple vertebral sclerotic/blastic lesions. Due to increased concern for metastatic disease, additional imaging was performed unmasking multiple nodules in the lungs, pleura, sternum and mediastinum. A pleural biopsy was performed which revealed a pathological structure of benign leiomyomata. There are no randomized studies which were conducted on the best way to manage these cases. 100 cases were described so far in the English literature, and were generally milder and did not involve lesion spread to such an extent.

35y/o G0, last menstrual period 07/11/2016, presented to the ER complaining of new onset left upper quadrant pain 9/10 on the pain scale starting on the day of presentation. Patient also reported episodes of nausea without vomiting. Patient denied any history of similar symptoms. Patient denied vaginal bleeding or discharge and could not recall any recent changes in her weight or appetite. The last time the patient visited an Obstetrician Gynecologist was one and a half years ago. Past medical history included asthma, controlled on albuterol nebulizer and diabetes mellitus controlled on Metformin. The patient had one abdominal myomectomy two years prior. On admission the patient had a transvaginal ultrasound (US) and an abdominal and pelvic CAT scan (CT). The impression on the CT was of a large heterogeneous lobular uterus measuring 19x14x19cm that occupied most of the pelvic (figure 1). 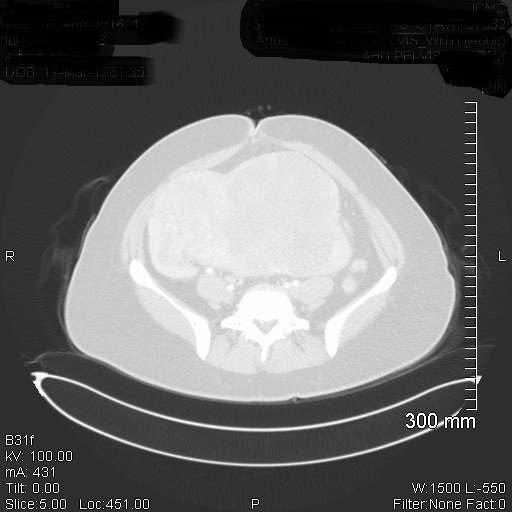 Figure 1: CT scan of an enlarged uterus with a mass of unknown origin

In addition, there was a separate mass measuring 4x3.6cm which was adjacent to the uterus. This could represent a pedunculated fibroid on a stalk or multiple enlarged lymph nodes through the iliac chain. Furthermore, the US detected vertebral body sclerotic lesions at L1,2,3,5,T6,10,11,12. No gross reduction or expansion was seen. The radiologist reported that the findings seemed unusual for endometrial carcinoma but that leiomyosarcoma could not be excluded. The US indicated that there was a huge heterogenous lobular uterus with a structure typical of fibroid uterus. The adnexa and ovaries were not visualized. CBC, chemistry 7, liver function test were drawn on admission. The only abnormal level detected was an elevated Hemoglobin. Tumor markers were drawn as well. HCG, CA 19-9, Alfa-fetoprotein, testosterone total/free/bioavailable and SHBG were all within normal limits. In addition, serum albumin, CA 125 and CEA were all normal. The only nonspecific marker which was found to be elevated was LDH at 1592 IU/L. On hospital day (HD) two, a chest CT without contrast was performed. The impression was of sternal lesions, focal area of pleural thickening at the costophrenic angle, 3 nodules in the right and 8 in the left lung, lytic lesions in the distal end of the left clavicle, mixed lytic and sclerotic lesions in the right fourth rib, sclerotic and destructive changes seen in the anterior aspect of the vertebral body with associated soft tissue mass in the superior mediastinum anterior to the vertebral body. The soft tissue mass measured 4.2 cm. The patient was kept for pain management and work-up in an attempt to establish a diagnosis. Interventional radiology was consulted for a possible CT guided biopsy. A CT guided biopsy was performed on hospital day 2 from a pleural lesion (figure 2). The final histologic report including all specific dyes were of smooth muscle cells with 0 mitotic figures, consistent with benign Leiomyoma (figure 3). 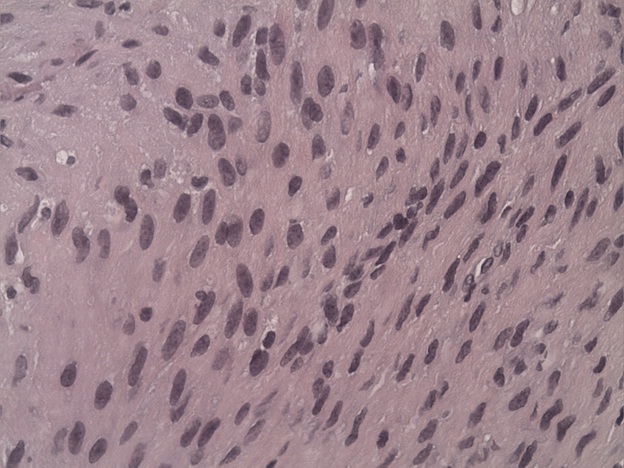 A thoracic surgeon was consulted for possible surgical management. It was decided not to operate at that time due to the vast extent of lesions in the thoracic cavity and increased risk of morbidity and mortality. Patient was discharged in a stable condition and was referred to a gynecological oncologist for further treatment options and evaluation. After reviewing the patient’s chart and imaging studies, hormonal treatment was recommended by the oncologist. This modality was chosen because of the metastatic distribution, lack of symptoms and the increased risk of morbidity and mortality of a surgery involving multiple organ systems. The only surgical procedures recommended were an abdominal myomectomy or hysterectomy.

Benign metastasizing leiomyomas (BML) is a disease affecting primarily women of reproductive age. The disease is of benign pathology but clinically behaves as a malignant metastatic disease. Since Steiner first described the disease in 1939, there were approximately 100 cases described in English literature [1]. The etiology is unknown but three hypotheses of the pathogenesis have been proposed: 1. Hematogenous spread to extra uterine locations due to uterine artery embolization or uterine surgery. 2. malignant behavior of benign looking uterine tumors, behaving as a low grade malignancy. 3. systemic leiomyomatosis [2-3]. Most common locations of spread are the lungs, but metastasis to the heart, lymph nodes, bones, omentum, peritoneum, pelvic cavity, breast and nervous system have also been observed. The diagnosis is usually incidental and is usually discovered 3 months to 20 years after uterine surgical manipulation [4]. Even though, English literature describes metastasis to various organs separately, it does not describe metastatic lesions to multiple locations in the same or different organ in the same patient. The disease in usually indolent since as leiomyomata, it will usually contain less than 5 mitotic figures per 10 HPFs without atypia or necrosis. The patient is usually asymptomatic, making diagnosis difficult. After radiographic imaging of multiple lesions, an imaging guided biopsy is warranted for definite diagnosis. The most important pathology to rule out in the differential diagnosis is Leiomyosarcoma or other forms of malignancy. Histologically, these tumors contain estrogen and progesterone receptors, and thus, react to fluctuating hormone levels and tend to regress postmenopausally. There is no treatment protocol, but the goal is to reduce morbidity and mortality considering the location of the lesions and their size. Surgical, hormonal and expectant management are all possibilities. Hormonal treatment includes depression of GnRh receptors, thus, depressing estrogen and progesterone levels. The treatment responses, which are described in case reports, are variable and with no relation to hormonal receptor presence [5]. However, progesterone effectiveness depends on the presence of progesterone receptors. Three theories exist about progesterone’s mechanism of action in nodule regression; 1. Progesterone inhibits the Hypothalamic-Pituitary-gonadal axis. This results in decreased estrogen production. 2. Progesterone upregulates 17 beta hydroxyl-steroid dehydrogenase, hence converting Estradiol to its less active form, Estrone. 3. Progesterone down regulates aromatase activity. On the other hand, Estrogen antagonizing drugs are also a treatment option and were shown to be affective in the treatment of BML [6]. Treatment options include anastrozole alone or combined with GnRh agonists for suppression of estrogen production. Both were shown to be very effective in BML treatment [7]. Drugs which were designed to alter extracellular matrix production and angiogenesis were also proposed as treatment options. TGF-β, in a normal myometrium, increases extracellular matrix production and decreases collagenase activity. In leiomyomatous tissue, the TGF-β pathway is dysregulated, hence its inhibition decreases extracellular matrix production and proliferation. Surgical treatment is also of primary consideration. Morbidity and mortality of a surgical procedure is weighed against expectant or hormonal management. Consideration includes; location, size, clinical affect and age. Combination treatment with surgery followed by hormonal treatment is also mentioned in case reports to be highly successful in BML treatment. No randomized controlled trials were conducted to establish the optimal treatment. All treatments should be individualized. Our patient presented with abdominal pain, probably resulting from increased uterine size and mass-effect. The lesions which were discovered were incidental and did not influence the patients’ everyday life. Since the patient was nulliparous and wished to maintain her fertility, the only surgical option which was recommended was a repeat myomectomy. In regards to the lesions which were diagnosed in the lungs, sternum, vertebrae, ribs and lymph nodes; multiple therapeutic options existed. An extensive surgical treatment would require multiple disciplines and would likely cause more harm than any benefit. Limited lesion resection would be a reasonable approach, but because the patient did not have any symptoms, such a complicated procedure involving multiple organs was not advisable. Hormonal treatment was also recommended, either alone or in combination with limited surgical treatment. The thought process in this is to reduce lesion size and possibly prevent future symptoms. The case presented above is very unusual and creates an ethical challenge due to the fact that the patient has multiple lesions in various organs and wishes to retain fertility. More consideration should be given to the disease pathogenesis and Pathophysiology of BML. A better understanding of the disease will shine light on new and better treatment options and fertility preservation.